menu Menu
A Closer Look At The New Howl-O-Scream Map
By Chris Posted in Featured on September 16, 2009 0 Comments 7 min read
Previous Next

This post is going to try to break down the new HOS map to determine what’s going on in each section of the park and at each attraction.
[singlepic id=228 w=320 h=240 float=center]
England:
We’ll start where everyone starts when they come into the park, Banbury Cross. If you look at the map you’ll notice that there is no scarezone or maze/house in Banbury Cross. This isn’t a surprise as some small children might be too frightened to venture out into the scarezones and Busch doesn’t want to force them to walk through one if they don’t want to. You’ll also notice that the shortcut to Sesame Street that has been recently blocked is visible. It may or may not be open to allow the aforementioned children to get to Sesame Street without having to go near Scotland, where The Moors will be.
Summary:
In summary, England will be what it always is, an entry point to the park with no real attractions.

Scotland:
When you leave England you, as you know, have three options, straight, right or left (I guess you could go backwards too, but that wouldn’t be a very exciting trip to the park). Let’s go straight. 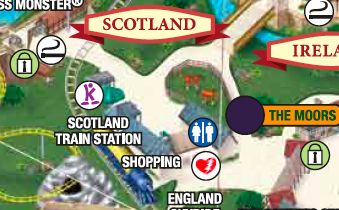 The only Howl-O-Scream attraction located in Scotland is The Moors. The Scareguide rating for The Moors is 4/5, so it would appear Busch wants to ease visitors into being scared. You’ll notice that on the map above the placement of the scarezone appears to at least have it’s perimeter fairly close to the entrance to Scotland and, in fact it would appear that if you choose to go to Ireland, you will have to go through The Moors.
Summary:
In summary, Scotland looks to be a good pass through scarezone and won’t be to frightening for children that happen to wander by.

Ireland:
If you decide to make a right out of England and head to Ireland, you may have to go through The Moors to get there as you can see on the map in the description for Scotland. Once you get to Ireland, I’d imagine you’ll find yourself in a section defined by the vast amount of pumpkins used for decoration. 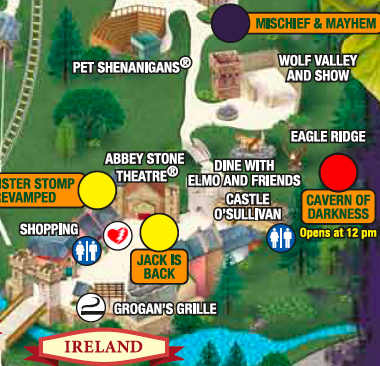 Ireland will house two shows, a maze and a scarezone. Although the map shows Cavern of Darkness as being behind Castle O’Sullivan, it is almost definitely housed in Corkscrew Hill. I have received word that Guest Relations has confirmed this and also, Corkscrew Hill has been closed since after Labor Day. I wouldn’t be surprised if the placement of Mischief & Mayhem on the map is a outer perimeter of the scarezone and will extend throughout Ireland.
As far as the shows in Ireland, there is “Jack Is Back” and “Monster Stomp Revamped”. If you’ve seen these shows before, expect pretty much what you got before.
Summary:
Ireland will probably be alright for children, “Jack Is Back” is more or less geared to children and has a Scareguide rating of 2/5. The other attractions in Ireland may not be suitable for children, the scarezone should be no more frightening than The Moors. Cavern of Darkness may be a very well themed maze and opens at 12 PM. The daytime operation of the maze will probably be less frightening than the nighttime operation, so if you have children that would like to experience it, the daytime may be your opportunity.

Italy:
Italy will be home to two mazes, a show and a scarezone.

Coming into Italy from England the first attraction you will run into is Revenge of Pompeii. I’d say this is the maze that most people are least excited about, as it’s something that has been around since Howl-O-Scream began. If you haven’t been to this maze before, check it out, if you’ve been there in years past, you’ll probably want to pass it by to get to the new attractions first (maybe come by on your way out of the park).
The next thing you’ll come to is Spellbound. I’m doubtful that this scarezone will be frightening as it’s near the kids rides. If you choose to go over to Festa, you’ll want to go all the way back to Roman Rapids, where Cursed is located. I’d imagine this maze will be somewhat similar to Wicked Woods, but with new theming it could still be good and worth a visit.
I’m not sure about you, but I’ll probably choose to eat in Italy so I can take advantage of the movies that will be shown in the theater. It has a Scareguide rating of 2/5, so I’m not expecting The Devil’s Rejects, but it should be fun nonetheless.
Summary:
Italy will most likely be another kid friendly section during HOS, there are kids rides and a show with a 2/5 rating. I’d say the thing to do in Italy will be to go to Cursed, maybe get some food, and head over to Oktoberfest.

Oktoberfest & Rhinefeld:
Oktoberfest will be the main show as it has been for the previous several years. It will house two scarezones, two houses and a show. Rhinefeld will have one scarezone.

This section of the park has what will probably be the most popular group of attractions this year. Harvest Hollow, Bitten and The Hunted are all located in Festhaus Park and will no doubt have good length line. All of the attractions here are rated 5/5 on the park’s Scareguide, so taking small children here is almost definitely a bad idea. Once you get through that group of attractions, you can head to The Festhaus to grab some food and check out Frankenrock.
It would seem that Stranger’s Beware will be taking place throughout Oktoberfest, but I’m not yet sure that’s the case.
Rhinefeld:
This section of the park will be home to only one scarezone, but it could be a good one as it will take place along a narrow street with a few spots for members of the “Scare Squad” to jump out at you.
Summary:
This section will undoubtedly be the busiest part of the park during HOS. Be ready to wait to get into Harvest Hollow, Bitten and The Hunted.

New France & France:
France and New France will have one maze and one scarezone combined. 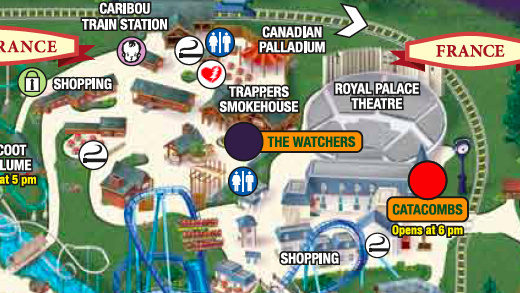 The Watchers will take place in New France and it should be interesting to see how the park uses the rooftops, as they are fairly close to the ground and the path leading to Alpengeist (or away from it) is lined on both sides by buildings.
I personally think that Catacombs may be a show stealer and may end up being the best maze this year. It’s in a spot that hasn’t been used and it looks like Busch is transforming the Royal Palace Theater based on what they want Catacombs to be. It looks like there is even some small scale digging at the theater. I’m excited to see what’s behind those dark gray walls on the railroad track side of the theater.
Summary:
France may be the spot to go for what may prove to be the best maze this year and it will be interesting to see how The Watchers plays out in New France.