menu Menu
Is This The Name Of The Show Replacing Emerald Beat? [Updated]
By Chris Posted in Featured on January 9, 2010 0 Comments 2 min read
Previous Next 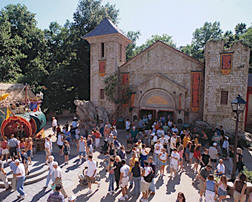 A while ago I came across a registration by Busch Entertainment Corporation seeking to trademark, “Everwyld” as an amusement park or amusement park service. The filing date was in May, 2009 and it certainly sounds like it could be an Irish show name. So, perhaps we will be seeing a new show with this name in 2010.
UPDATE: I would be remiss in mentioning that this name is not only linked to a new show to replace Emerald Beat, but when I posted that I had found this buried in the trademark registrations back in mid-October, there was some speculation (must be registered in the forums to see this thread) that the park might be replacing Corkscrew Hill with another attraction of the same type and perhaps this could be the name. The same speculation is also present over at BGEscape.com, with further speculation that it is this which will be announced in Feb./Mar. 2010 rather than anything regarding the Big Bad Wolf replacement project.
MORE UPDATES: I did some searching on IMDB and found that the directors/writers of Corkscrew Hill both have a project in development called Corkscrew Hill, but the actual show seen in previous season is also listed as being completed in 2001. I’m thinking that the “in production” project is using a fake name for a Corkscrew Hill replacement project. It’s looking more and more like “Everwyld” is going to be a new 4-D attraction.
Check out the IMDB pages for the Directors/Writers of Corkscrew Hill: Jeffrey Kleiser, Diana Walczak.
What do you think about “Everwyld”, could this be the name of the new show? A replacement for Corkscrew Hill? Feel free to discuss in our FORUMS.