Though the BGWFans homepage has been pretty quiet over the last few weeks, the park has still been very busy preparing for the Busch Gardens Williamsburg Food & Wine Festival, working on the new Coca-Cola Market, continuing to clean up Aquitaine, and more. I’ll start out the post with a look at the ongoing construction  for the Food & Wine Festival, then I’ll go over what’s happening at the Coca-Cola Market, next I’ll move over to Aquitaine and cover the changes there, and finally I’ll highlight a few other miscellaneous changes that I spotted around the park. Also, at the very end of this post there’ll be a chance to win a copy of the brand new BGWFans Pro for iOS so stick around for that. Enjoy!
Oh, one last thing, don’t forget to read the captions!
[hr]

If you haven’t yet read our post containing all the information available on the Busch Gardens Williamsburg Food & Wine Festival, I highly recommend doing so. You can find said post here. Anyway, Busch Gardens has begun in-park construction on the Greek, Spanish, and Scandinavian booths as well as some off-site construction on two unknown booths. In addition to the work on the event’s booths, some additional changes have been made to the new stage in San Marco- presumably for use during the Food & Wine Festival. Anyway, everything is divided up into their proper categories below.

Other than building a short retaining wall around the area and pouring a concrete pad, not much progress has been made on the Greek booth. This is located across from Escape from Pompeii’s splashdown viewing area.

Structurally, the Spanish booth looks fairly complete. I’d imagine we’ll some a good amount of work put into the rough appearance before the event starts though. This booth is located on the Da Vinci’s Garden of Inventions side of San Marco where the grape stomping booth is normally located.

This basically looks like a red version of what the Spanish booth looked like last weekend. Hopefully they’ll add a bit to the top to make it look a little less box-like. The Scandinavian booth is located next to the snack stand in the back right of the Killarney hamlet.

This booth was the only one located backstage last weekend but since this picture was taken, I’ve been told that another one has begun construction back there as well. I have no clue which booth this is, but it looks rather fantastic.

If you recall from our last photo update, Ristorante Della Piazza’s stage was replaced over the off-season. Since then, the park has come back and made some additional modifications- most notably they’ve added shop facades to either side of the main stage. I assume these will be used during the Food & Wine Festival show that was mentioned in passing during the park’s announcements on Pass Member Preview Day.

Though the park claimed the new Coca-Cola Market in Festa Italia would be finished by May 1st, it looks like they still have quite a lot of work to do. It appears that interior work has begun, but it’s still clearly in the early stages right now. One thing that I find particularly intriguing is the map on the back wall, though I’m not entirely sure whether or not that’s left over from the ride that used to occupy the pavilion long, long ago. Also, before I get to the pictures, sorry about the quality. They were taken from rather precarious places.

As you may recall from the opening weekend photo update, Aquitaine, the park’s French-themed hamlet, has received some love for 2013- specifically on the Jack Hanna’s Wild Reserve side. New doors have been added to the newly revamped La Belle Maison building, the ugly face painting booth has been replaced by a new covered sitting area, grapevines have been planted, and much more. Anyway, since then, some new details have been added throughout- some of which I find rather impressive. Great job Busch Gardens- this is the attention to detail that we want to see everywhere.

There’s nothing massive of note here, but I figured they were worth sharing anyway. As always, read the captions- they should do a fairly good job of explaining what you’re looking at.

Busch Gardens Williamsburg sent out an email to pass members today announcing that they’d be holding two pass member exclusive ride nights this month- one on the 10th and another on the 17th. According to the message, both sessions will begin at 8pm and last two hours. The first one will take place in the park’s Oktoberfest hamlet and allow guests to ride Verbolten, Mach Tower, DarKastle, and all the various flat rides in between. The second will take place in Da Vinci’s Garden of Inventions and Festa Italia giving access to Apollo’s Chariot and a total of eight flat rides in the surrounding areas. If you’re interested in attending, you can find the full email here.
NOTE: This is a passholder exclusive event- Fun Cards won’t cut it this time.
[hr]

The New BGWFans for iOS

Over the last few months, Chris has been hard at work on a completely revamped version of the BGWFans for iOS app which, at least in my opinion, looks absolutely fantastic. As of now, the pro version has been updated and the free version should be getting the new features and UI any day now. Screenshots of the upcoming update to the free version as well as the current version of BGWFans Pro can be found below. Make sure you stick around after the screenshots for a chance to win a copy of BGWFans Pro for iOS!
UPDATE (May 2nd): The revamped free version is now live as well! You can download it here. 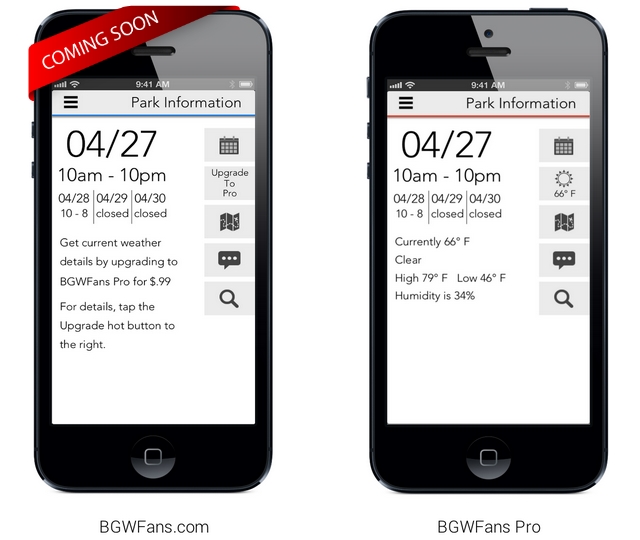 In celebration of the release, Chris was kind enough to give me a few promo codes for the new Pro version to give away to all of you. I’ll be giving away a free copy of BGWFans for iOS Pro to two random people who enter using the form below before 11:59pm EST on Friday the 3rd of May. While you wait to see if you won a copy of the pro version, I’d encourage you to check out the free version here. It’s a great way to keep up with the BGWFans community as well as a fantastic resource to keep with you while you’re enjoying a day at Busch Gardens Williamsburg. Anyway, good luck in the giveaway!
[hr]
[iconbox title=”BGWFans for iOS Pro Giveaway Entry Form” icon=”document”]I’m sorry, this giveaway is now closed. Congratulations to everyone who won![/iconbox][hr]
Just a little tip if you want some additional chances to win: We’ll be giving away a few more copies on the ParkFans Forums as well as on our Twitter and Facebook pages over the coming days in addition to those given away in the contest above. Good luck!