menu Menu
Catching Up with InvadR
By Zachary Posted in Featured, Previews on November 1, 2016 One Comment 8 min read
Previous Next

Over the last few months, Howl-O-Scream’s Evil Encore has taken center stage in the minds of most Busch Gardens Williamsburg fans. Now that Mr. Karver and his dolls have seen their final curtain call, lets point the spotlight back on the park’s 2017 wooden roller coaster project, InvadR.
Historically it has been difficult for BGWFans to cover new attraction projects while the park is closed. That said, thanks to Busch Gardens Williamsburg’s commitment to InvadR being as open a project as possible, we have been receiving an unprecedented level of access to the attraction itself and, better yet, to the folks responsible for its creation.
On that note, today, we’re going to focus on the current physical state of the attraction—not only the progress on InvadR’s support structure and trackwork, but also the construction on the station and the surrounding structures. Capping off that more traditional coverage, we were given the first look at both of InvadR’s nearly-finished lead cars. There will be plenty to see on that front towards the end of this article.
One last thing before we jump in though: As referenced above, the majority of these pictures were made possible by a private tour provided to us by Busch Gardens Williamsburg’s Marketing Department—specifically Dan Dipiazzo, Nathan Warters, and Ron Vample. All three of them, from my point of view at least, have been doing a truly immaculate job handling this project.
Anyway, with that said, a huge thanks to Busch Gardens Williamsburg for providing us the first look at InvadR’s trains as well as letting us get another glimpse at the site!
Now, InvadR!

Lets open up with what most of you are likely to find must noteworthy. Four main sections of InvadR have gone vertical at this point: the station (green), the first turn out of the station (blue), the area surrounding the ride’s first tunnel (orange), and the base of the second drop (purple). A color-coded site plan can be found below to give you a better idea of the areas we’re talking about. 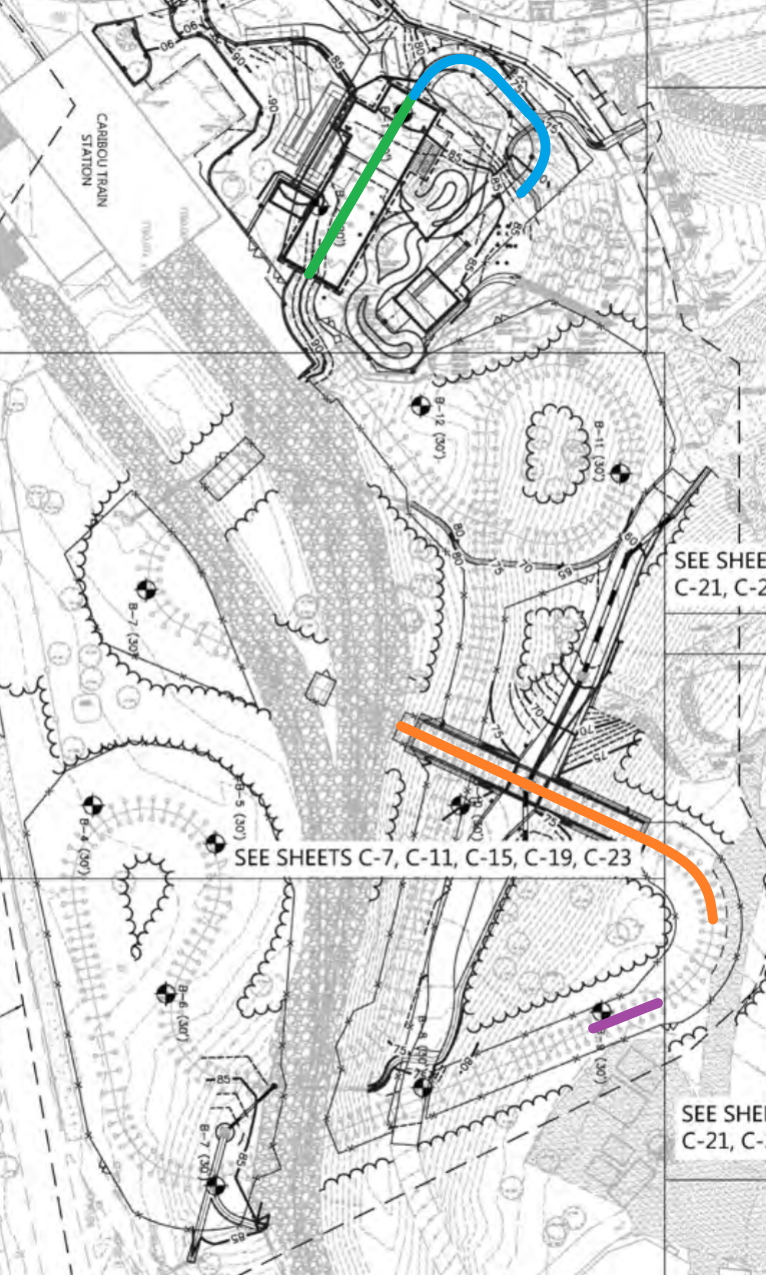 We’re going to cover the station in its own section in a minute, so lets jump into this by looking at the first turn.
We’ve only had the chance to get one good angle on this section thus far. That said, this will be a highly visible section of the ride once all of the construction walls come down. Below is a picture of what the turn looks like as of October 31st.

While the picture above does a great job of showing just how extreme the banking on the turn is beginning to look, the best views of the larger area in question come from our Instagram video below.

The video above also gives the only look we have to share of the beginnings of the bottom of the second drop (the purple section on the map above).
The front half of InvadR’s site is far from easy to photograph, but the back half of the site has flown almost entirely under the radar due to how hard it is to get a good look at. Below is another Instagram video showing what can be seen of that area from the Busch Gardens Railroad.

Right towards the end of that video a number of support structures can be seen stacked on the ground awaiting their turn to be raised into place. The best picture I managed to grab of them while touring the area surrounding the site with Marketing can be found below. Hint: They’re the steel structures in the background in front of the trains.

Track and supports aren’t the only thing going vertical. In fact, a stunning amount of work has already taken place on InvadR’s station, gift shop, locker shelter, and even the entry plaza perimeter walls.
First off, the station. Let me just say that this building is looking gorgeous. I have a soft spot for exposed rafters and it looks like InvadR’s station will offer those in abundant supply.

The park is getting a jump start on InvadR’s entry plaza too. The coaster’s locker structure (left of the first shot) and light poles all appear to be nearing structural completion. Even more impressively, InvadR’s photo sales booth (second picture) is looking absolutely incredible!
If all of that wasn’t enough, installation of the spiked wooden perimeter wall around the entry area for InvadR (third picture) has already started. It too is looking absolutely fantastic!

As mentioned in the introduction, Busch Gardens Williamsburg’s Marketing Department invited BGWFans out to the park on October 31st to get the first look at both of InvadR’s nearly completed lead cars.
Why nearly completed? They still lack theming—namely decorations on the lead wheel assemblies and decals on the sides of the cars. With that said, both lead cars are already stunners.
The first thing you need to know is that InvadR features two Great Coasters International Millennium Flyer trains with seven cars each (not counting the zero car—the small area without seats at the front of each train). Each train also features a distinct theme: Vikings or Villagers. The turquoise car is the lead car for the Viking train and the tan car is the lead for the Villager train.
The second thing you need to know about these trains is that they are not brand new—they previously ran on Gwazi at Busch Gardens Tampa. That said, they were added just a couple years before Gwazi closed. Furthermore, in its final years, Gwazi rarely ran all four trains so many of them saw a lot of downtime on the job so to speak.
Considering all of that alongside the fact that SeaWorld Parks & Entertainment parks are very well known for their maintenance prowess, you should have no concerns about recycled trains on InvadR. However, in the off chance that you still do, also know this: Busch Gardens Williamsburg has stress tested the trains to ensure that they are still in tip-top shape and a full off-season maintenance equivalent inspection and rebuild has taken place as well.
As if all of this somehow wasn’t enough, there’s more.
Busch Gardens Williamsburg has also sanded down and refinished all the exposed teak wood on the Millennium Flyers and let me tell you, they look great. Plus the park has fully replaced the old upholstered seats with a more modern rubberized plastic-feeling material. Lastly, a new restraint system has been installed which allows the lap bars to lock in the open position while the train is in the station. This allows guests to use the lap bars as a handrail of sorts while entering and exiting the train.
Anyway, I admit I am a huge Millennium Flyer fan and I could go on and on about how much I love these trains. Furthermore, I could talk for hours about how ecstatic I am to see Busch Gardens making these small guest experience investments, but I’ll spare you. Instead, sit back and enjoy the pictures!

I hope you all enjoyed the pictures! Another huge thanks to Busch Gardens Williamsburg’s Marketing team for taking their time to let us poke around in order!
Do you have any questions about InvadR that you want answered? If so, let us know in the comments below or on Facebook and we’ll pick out the best ones we get and try to get answers!
As always, stay tuned for more on InvadR by following us on Facebook, Twitter, and Instagram! We will have more soon!