menu Menu
Battle For Eire Plans Reveal Secrets from The Otherworld
By Zachary Posted in Featured, News, Previews on December 20, 2017 One Comment 8 min read
Previous Next

This article contains drawings and concept art that reveal thematic details of Battle For Eire that have not yet been made public by Busch Gardens Williamsburg. Anyone wishing to avoid Project 2018 spoilers should turn back now. You have been warned.

The documents and information presented below reflect the park’s plans for Battle For Eire as of early November 2017. As work continues on the project, details are bound to change. Because of the nature of these documents, they should be viewed as a representation of what the park wants Battle For Eire to look like, not necessarily a direct depiction of the final project.

This article assumes that the reader has a basic understanding of Busch Gardens Williamsburg’s 2018 VR attraction, Battle For Eire. If you are not yet familiar with the attraction, before continuing, take a look at the park’s page on the project, here. If you are left with any questions, feel free to ask them in the comments section below this post.

An extensive collection of Battle For Eire design documents obtained exclusively by BGWFans is offering the first glimpse at what guests can expect to find inside of Busch Gardens Williamsburg’s 2018 attraction.
The documents begin by dividing Killarney’s existing simulator building into seven distinct zones: Entry Portal & Marquee, Queue, Antechamber, First Preshow, Second Preshow, Theater, and Exit Hallway. The annotated blueprint from the plans is included below. 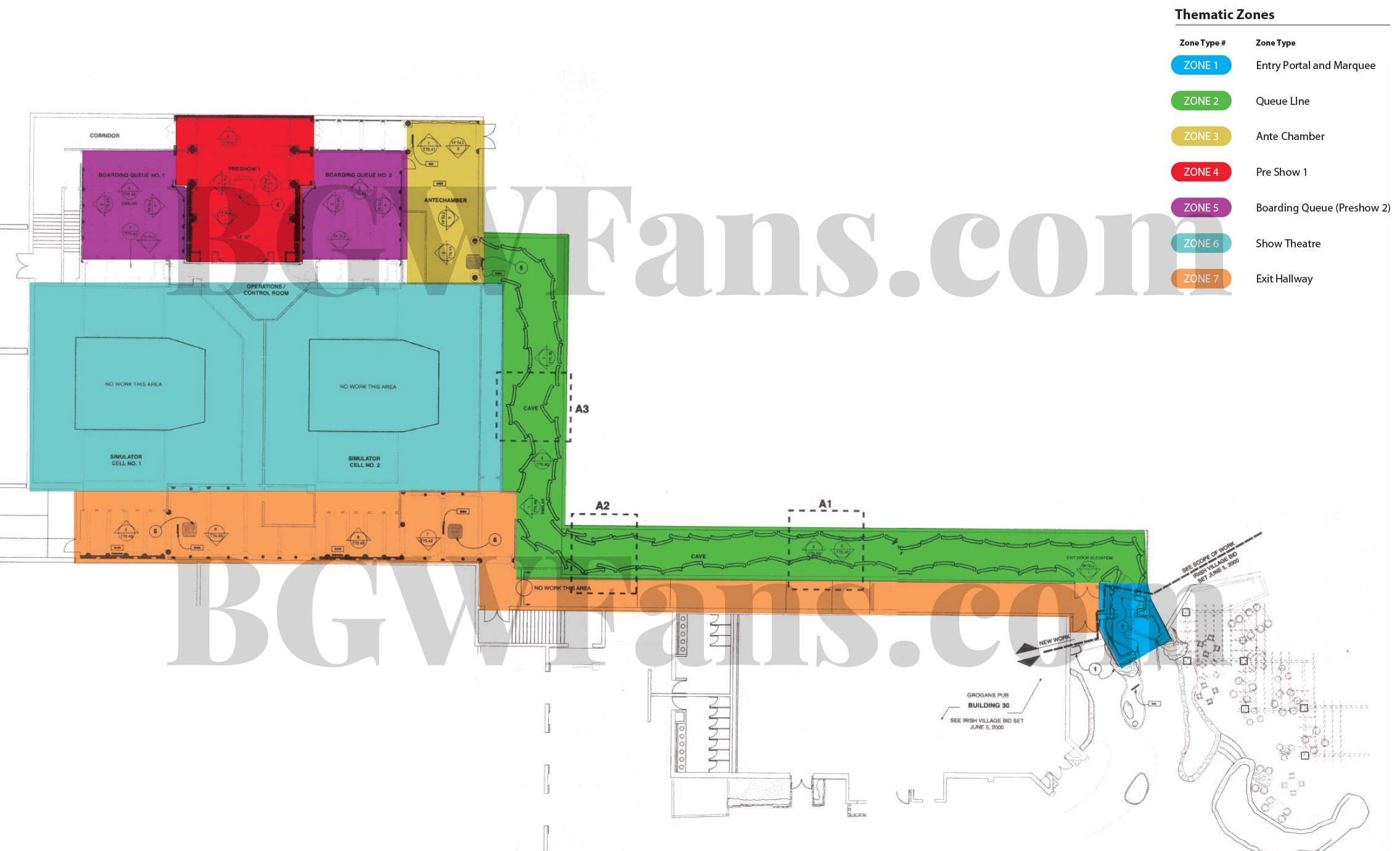 Highlights from the documents are presented below—categorized by the seven zones represented in the blueprint above. The only exception to this is the theater area (Zone 6) in which we expect little to no theming work to take place.

As guests approach Battle For Eire, they are greeted by a familiar tower facade, path sign, and ride safety board. Aside from some branding alternations, much of the Zone 1 area appears as though it will remain structurally unchanged from the days of Europe in the Air and Corkscrew Hill. Considering many would argue that Corkscrew Hill, in particular, possessed some of the strongest path-presence in the park, this is likely a good move.
Concept art and graphics for the path sign and ride safety sign are included below.


Far and away the most dramatic change coming to the Zone 1 area will be the new Battle For Eire marquee on the existing tower facade. Concept art from the plans can be found below. 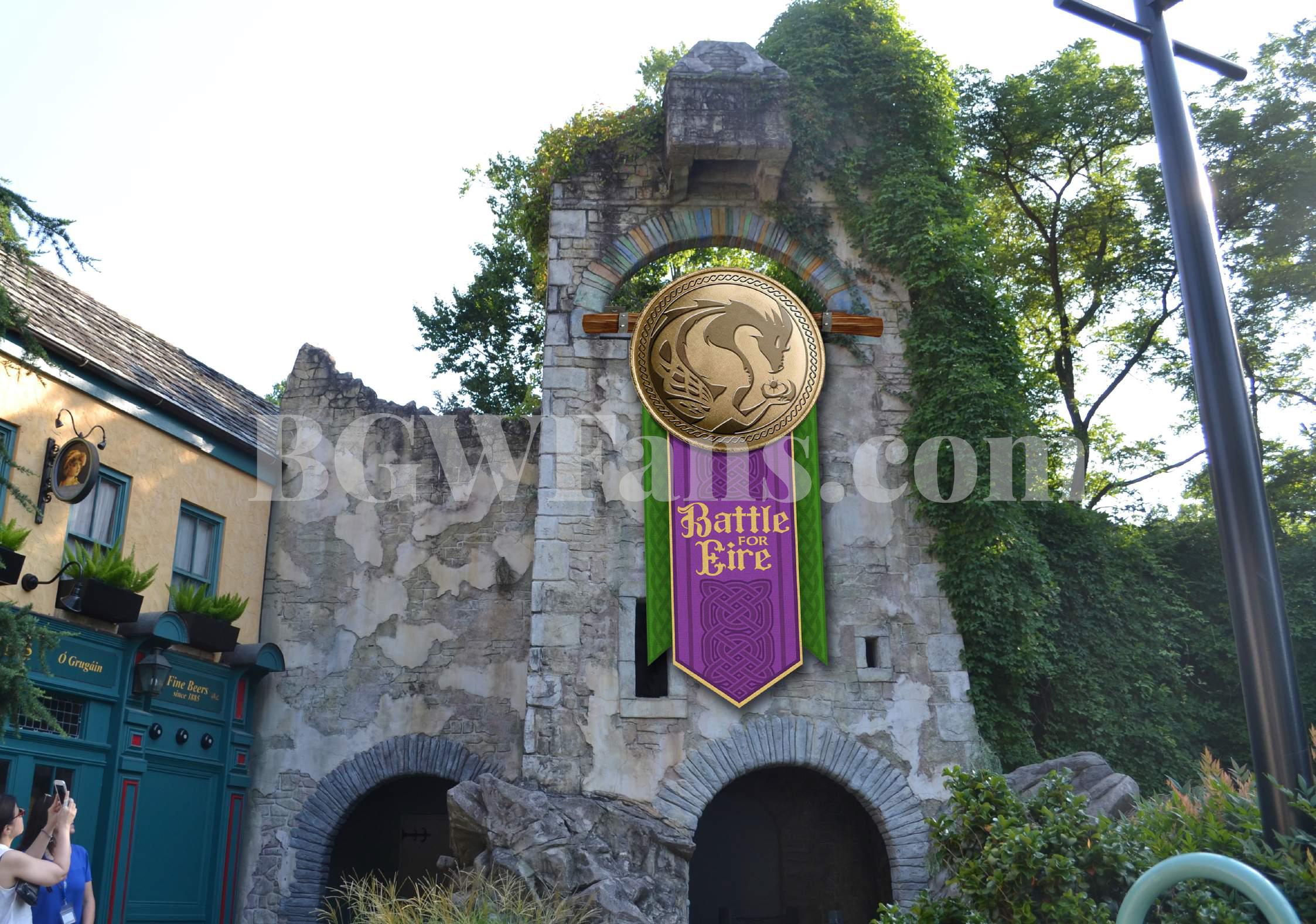 Judging by the concept art, this could be the best this tower has ever looked. That said, the image above only tells a small fraction of the story. After the sun sets, this new signage comes alive. Nighttime concept art depicting all of the planned lighting is included below alongside a design document that does an excellent job of explaining the various details of the sign.

Upon entering Battle For Eire’s queue (Zone 2) guests are greeted by the same stone cave that has always been a staple of Killarney’s simulator building. As was true when Corkscrew Hill was converted into Europe in the Air, the changes to this area remain minor.
The generic triangle queue lights that came with the attraction’s conversion to Europe in the Air are being refaced with translucent leaf-themed shades. Concept art from the plans depicting this change is included below. 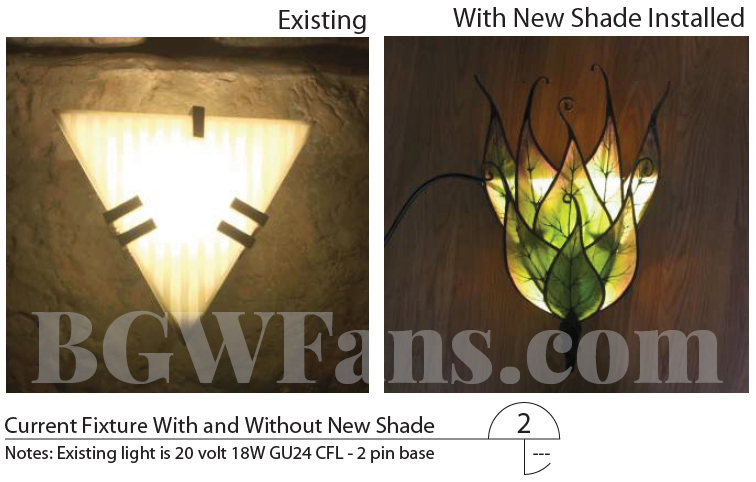 The only other alteration of note in Zone 2 has to do with the cracks between stones in the cave walls. Though there isn’t any concept art to depict what the final product may look like, some sort of LED lighting is being added inside the gaps between the rock walls.

Zone 3 acts as a staging area for Battle For Eire’s preshow rooms. This is also almost certainly where the mask section of the VR headsets will be distributed to guests.
Like the queue, this is another area that doesn’t appear to be receiving heavy renovation work. This seems to be due to the fact that most of the walls will be covered in carts—creating a densely-packed marketplace-like environment. Design plans for the carts alongside a floorplan of the Antechamber area showing the location of said carts can be found below.

The changes we have covered thus far have primarily been minor alterations to the existing scenic. As evidenced by the concept art for Zone 4 (included below), that trend ends here.

The concept art alone is impressive, but there is far more to this room than initially meets the eye.

Before moving on from Zone 4, a detailed design document focused on the dragon banners is included below.

Fortunately, Battle For Eire’s second preshow room, Zone 5, follows in the footsteps of the first—it is incredibly detailed—possibly even more so than the first. The concept art is included below.

Another aspect shared with the first preshow? This room features its own fair share of secrets.

As mentioned previously, we are skipping over the theater (Zone 6) because little to no theming work is expected in that area.

Zone 7, the attraction’s long exit hallway, will remain very familiar to anyone who remembers Corkscrew Hill or Europe in the Air. For its conversion to Battle For Eire, the only notable differences come from paint and lighting. That said, in the right hands, paint and lighting can do a lot. Below is a piece of concept art displaying the final product. 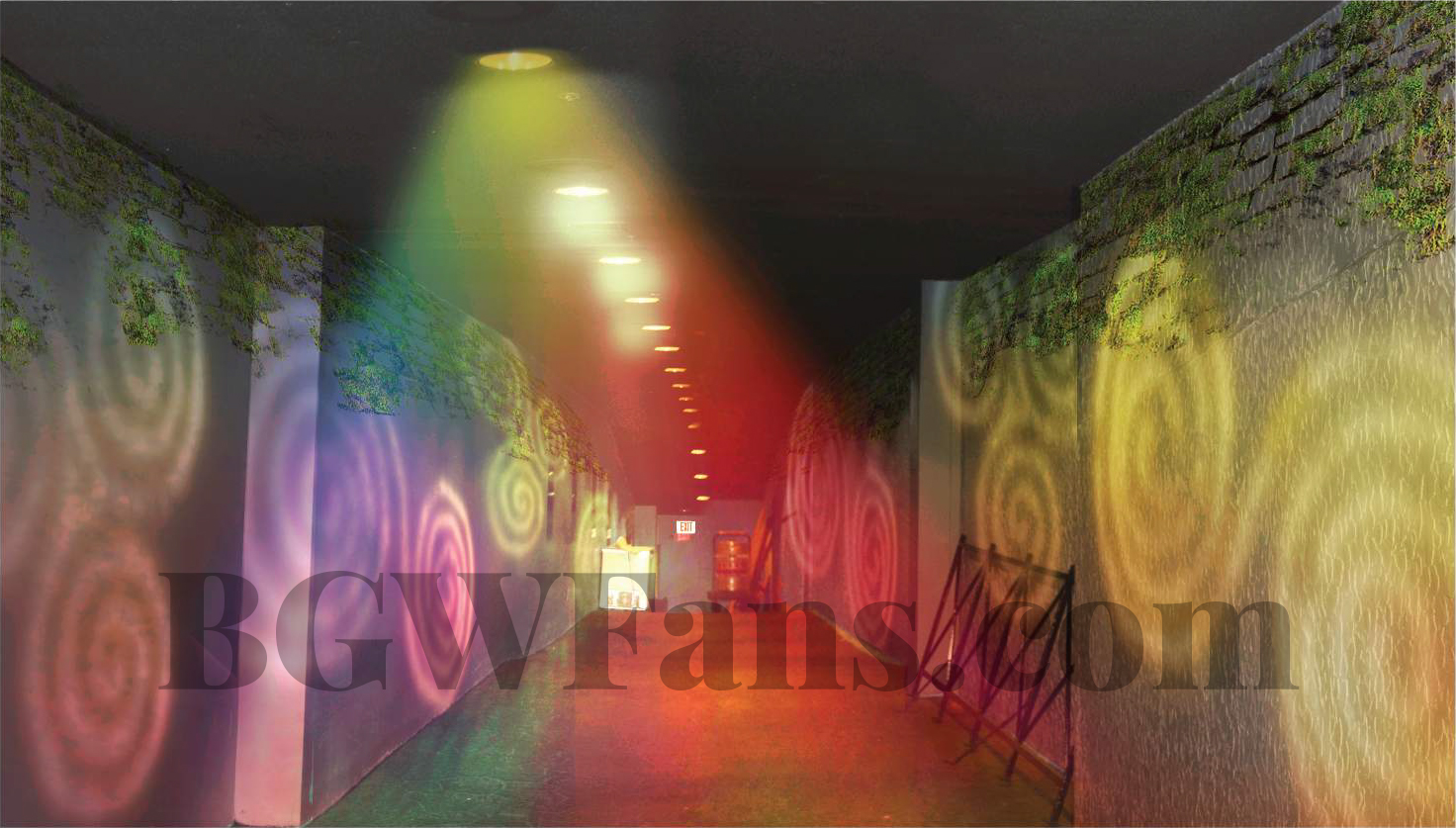 The most notable planned alterations evidenced in the Battle For Eire documents are listed below.

Watching the official development blog, it has long been clear that Battle For Eire is not just another sloppy virtual reality overlay. I firmly believe that the plans presented previously in this article further affirm that assessment.
Virtual reality is a fascinating technology for the amusement industry that has suffered from a long string of lazy implementations by parks who have little to no experience in world building. By combining traditional amusement park storytelling methods (intricate queue theming, preshows, etc.) with the new immersive capabilities of VR, Busch Gardens Williamsburg is building an attraction unlike anything we have seen before in the states.
The ride system—a fairly traditional motion simulator theater—already presented one of the strongest starting points for an attraction of this type. The new theming and preshow elements presented above paired with a revolutionary VR headset implementation and a solid ride platform to build upon, come together to set the stage for what should be one of the premiere mass market virtual reality experiences available when it debuts next Spring.

A huge thanks goes out to the sources who came forward to provide us with the information shared in this article. Content like this would not be possible without their contributions.
Know something worth sharing? Don’t hesitate to contact us—even if it’s information that can’t be published, we are always looking to corroborate whispers we are hearing from others.