It is that time of year again: the season when BGWFans and our Band of Merry Foodies head to the park to try every dish at the annual Food & Wine Festival.

Last weekend Zachary, Thomas, Luke, Zimmy, and I, accompanied by our friends Renee and Meri, spent Saturday and Sunday exploring the 2018 event. In all we sampled 62 dishes and 11 non-alcoholic “specialty” beverages. We did not taste all of the beers, cocktails, and wines, because the alcohol would have dulled our palates.

For those readers unfamiliar with our system, here is a quick overview. All voting participants were required to try everything. The entire team split each dish to avoid a massive outbreak of food comas. We discussed and scored each item as we went. The highest average score at each booth was awarded “Best In Booth.”

We determined years ago that we could not compare mains and appetizers with desserts, because the sugar would always prevail. As a result, we selected Best in Booth Savory, when there were multiple such dishes; and Best in Booth Sweet, when we were lucky enough to find more than one dessert at a single kiosk. At the end of our culinary adventure, we compared all of the dessert scores to rate them against each other.

We elected not to select either a Best in Show Savory or a Best in Show Sweet this year. All of our favorites are captured in the summary below, however, because we included every dish that scored at least a four out of a possible five points.

Additionally, each voting member selected one savory and one sweet dish to recommend. Neither could be a Best in Booth item.  The result is a list of both the high-scoring items and offerings that caught the attention of at least one team member.

With all of that said, here are our 2018 recommendations. Dishes that did not make the list are not necessarily bad, but they did not compare in quality, taste, and/or interest to the items we selected.

It is worth noting that historically we have noticed both the flavor and quality of individual items can vary dramatically from day to day, and even sometimes from hour to hour. Additionally, we conducted our review on the first weekend, so the staff’s skills and techniques could change as the event progresses. As such, we are not willing to claim that our scores absolutely reflect how things will taste in the future. 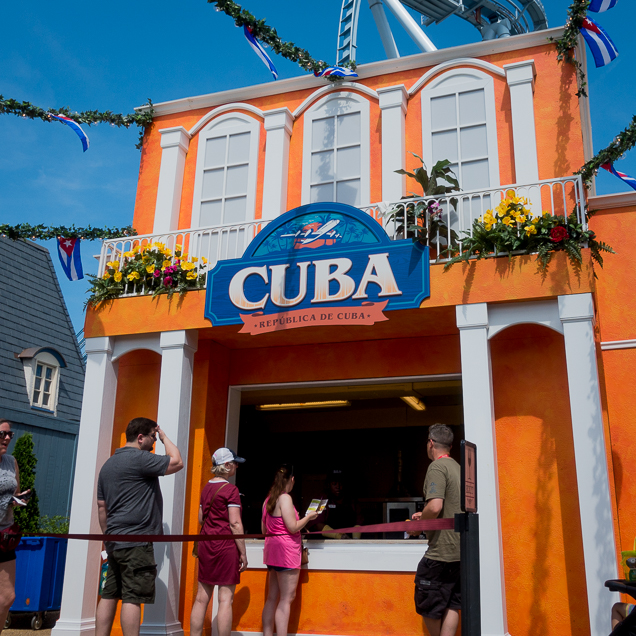 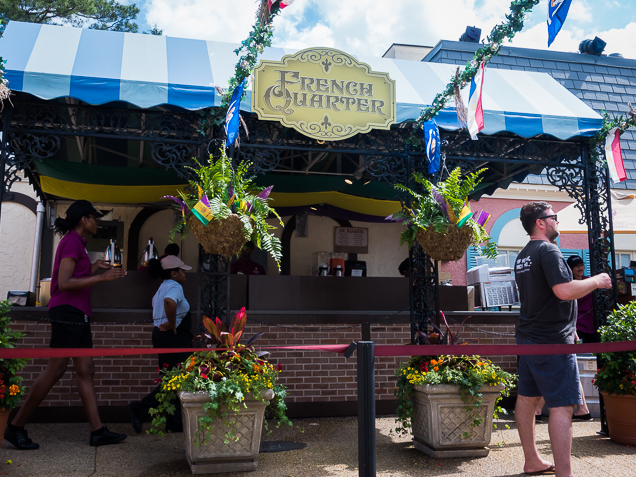 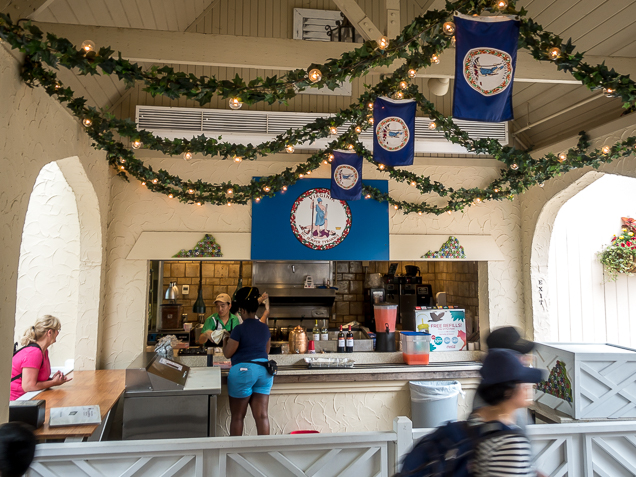 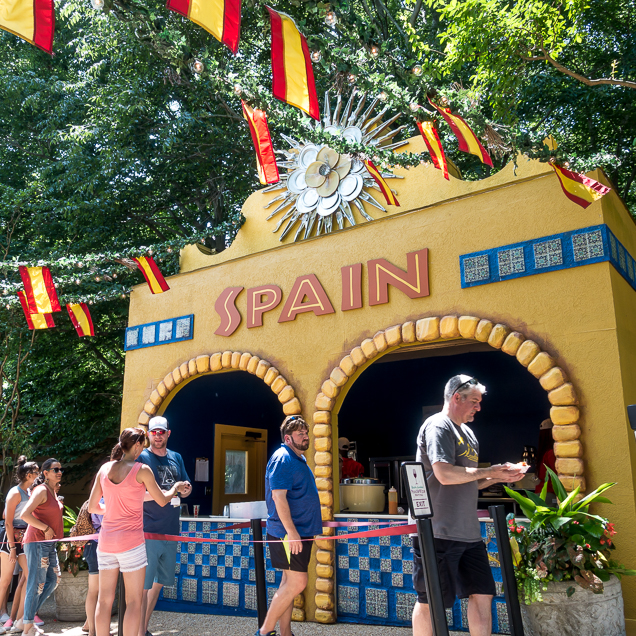 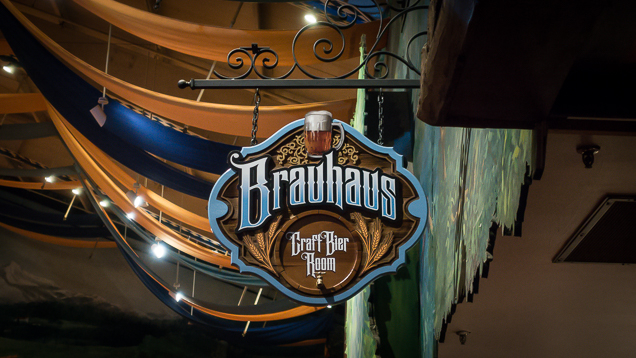 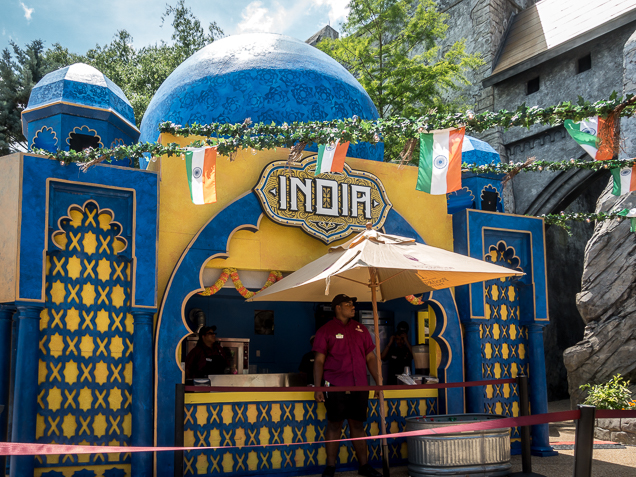 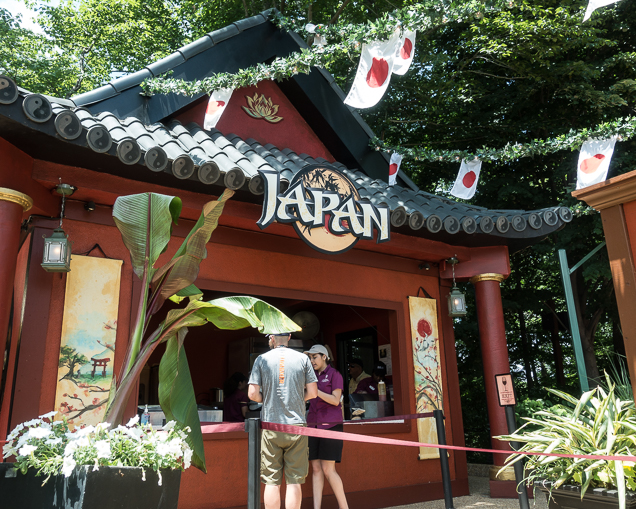 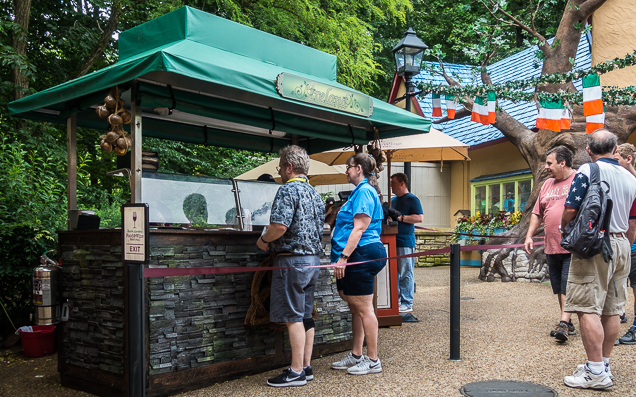 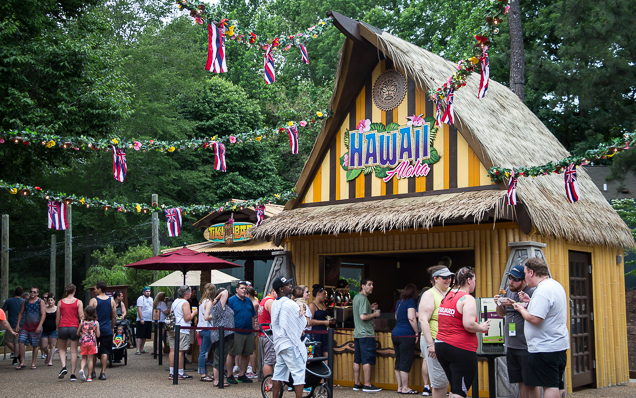 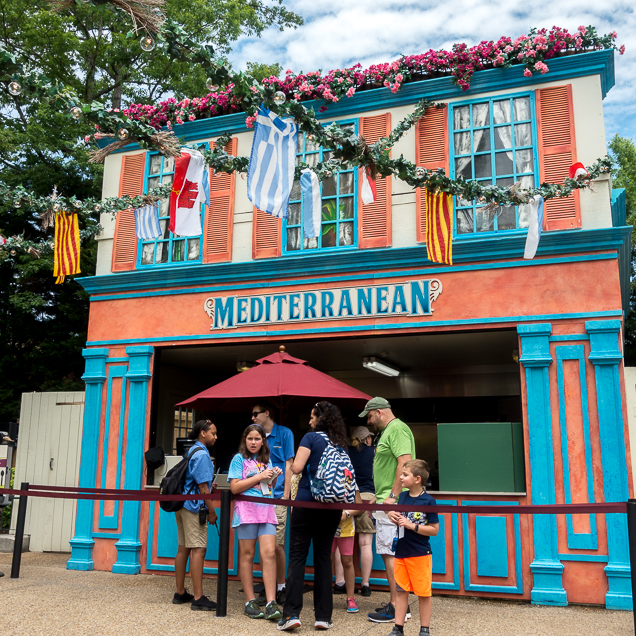 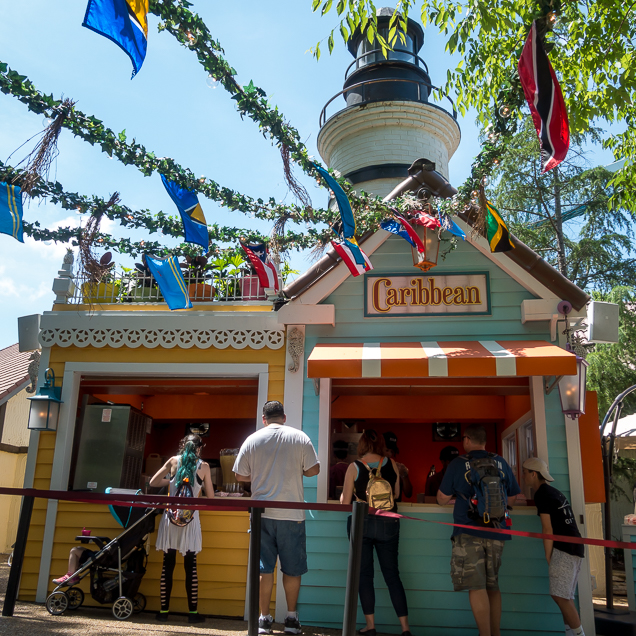 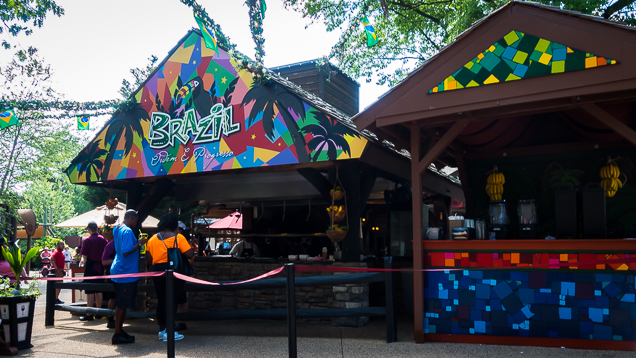 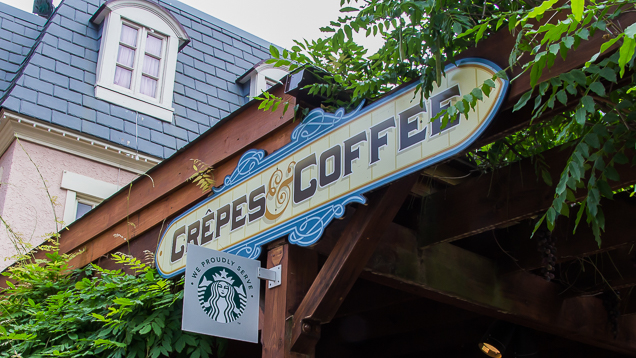 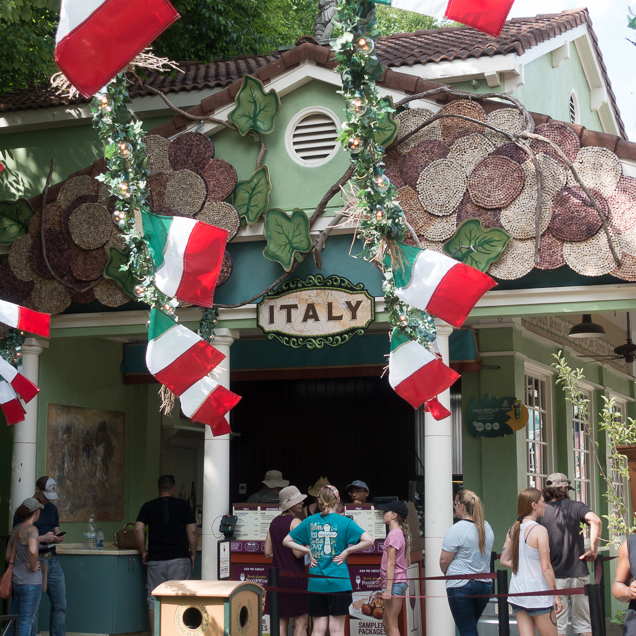 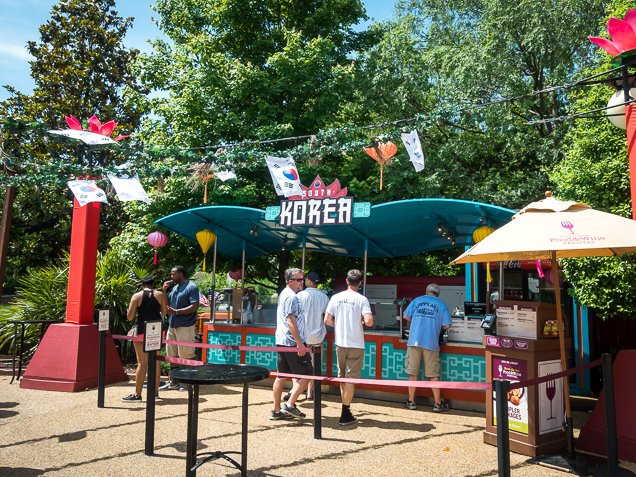 Last year Chef Justin told us that he was introducing several “specialty drinks,” for those who did not want to (or were not able to) experiment with the adult beverages. We discovered that we very much enjoyed the variety of interesting flavors, and thought they would be worth sharing with our readers.

The park added several new beverages this year, and we noted a strong emphasis on both citrus flavors and iced teas & coffees (four of each). In general, the drinks paired well with the food options, and in fact in some cases were perfect for balancing the spices in the savory dishes. For example, the milky and sweet Horchata immediately quenched the fire created by the surprisingly hot Ghost Pepper Guacamole at the American Southwest Booth.

So, this year we decided to taste and score all of them. Rather than select a Best in Category, however, we agreed simply to recommend four of our favorite drinks. As with the food, we will provide more in-depth commentary on the individual drinks in Part Two.

Of the 11 non-alcoholic options, each of us selected our favorite mocktail:

Every year BGW surprises us with its decisions about which booths to cut and which to add. 2018 saw the demise of both Canada and Germany, although the new Brauhaus station offered the old Schnitzelwich. The Asia booth was essentially replaced by Japan and South Korea. In addition, the park added Brazil and Cuba, for a net gain of two kiosks.

While we have never loved Canada, and found the German offerings to be only occasionally worth buying, we remain baffled that they were removed before Italy. While we universally loved the new Pizzelle Cookies, we stand by our position from last year that serving desserts that literally come from Marco Polo’s Marketplace is not acceptable at a Food & Wine Festival kiosk. Similarly, while we appreciate the park’s attempt to preserve the guest-favorite Schnitzelwich, the addition of a “booth” inside the Brauhaus is simply fraudulent. The fact that the only other dish served there is a plate of meatballs, which is available at that location year-round, only adds to the absurdity.

Those negative thoughts aside, we fully support the other four new options. Brazil offers the opportunity to serve unique flavors, and we loved everything at the Cuba booth. Moving away from the regional “Asia” booth and introducing Japan and South Korea gave the park the ability to offer many more culturally-specific foods. In fact, we would love to see all of the booths replaced by (or restored to) specific countries.

In addition to these more obvious changes, we noted significant improvements at a few of the older locations. Of particular note, both French Quarter and Virginia went from mediocre to delicious, each boasting dramatically higher scores than ever in the past. Additionally, we were pleasantly surprised by by how much more prominent the flavors were at the American Southwest booth.

One final note about the booth themes. The introduction of the Brauhaus, Japan, and South Korea booths this season brought into focus the inconsistencies in how each station is defined. Some are linked to specific countries, including the oddly-specific South Korea kiosk. Others encompass entire regions like the Mediterranean booth. Members of a third set represent specific states, cities, and sub-cultures within the United States. A final group employs year-round quick service restaurants to serve F&WF-specific dishes.

We would argue that at a minimum that last category should be eliminated. Specifically, we find the inclusion of both Crepes & Coffee and the Brauhaus as “booths” to be pointless. We would also propose that all of the regional booths be split into specific countries, as the park did with Asia this year. Yes, we do miss Greece.

So as not to bury the lead, the service at a majority of the booths last weekend was simply abysmal.

While there were a few bright spots — the staff at the Cuba kiosk was charming and efficient — more often than not we encountered workers who appeared ignorant about their jobs and disinterested in learning. In one case we waited for more than 10 minutes with no one in front of us, before anyone offered to make us our food. At multiple locations the kitchens were so slow that the relatively short lines backed up as much as 45 minutes. We had to repeat and correct our orders several times, despite the very limited number of options at each booth. In fact, the staff did not seem to know what was on the menus at their locations. For example, one cashier sent us to another register, because he apparently did not recognize the name of one of the three items at his booth.

While we are certain that some of the problems stemmed from the fact that it was the first weekend, we no longer believe that is an acceptable excuse. The Food & Wine Festival is in its sixth year. Most of the booths have been around for several seasons, and some debuted with the event in 2013. While new staff obviously need time to train, that should happen before opening weekend. No one should be asked to prepare dishes or man a cash register for the first time during the festival.

We hope that by next weekend all of the staff are as delightful as the servers and cashiers at the Cuba booth, but we are disappointed in how much worse service was this year than at any time in the past.

Overall, we thought the event was very good this year. While it was, perhaps, not as fantastic as 2017, the new booths, especially Cuba, were great additions. We enjoyed the wide variety of flavors and cooking styles, and hope to see more exotic dishes added next year, as well.

Finally, we need to thank the entire tasting team — Thomas, Zimmy, Renee, and Meri — for spending the weekend with us, and helping judge all of the food and drinks.  We would also like to thank Luke for taking so many of the fantastic pictures for this article.  We could not have gotten everything done in one weekend without their help.