This morning we rode Battle for Eire, Busch Gardens Williamsburg’s brand new, first-of-its-kind VR attraction. If you are looking for Battle for Eire content, for now, check out the most recent posts in this thread on ParkFans.net or our social media channels (particularly Instagram).
Anyway, you’d think that something that noteworthy would be monopolizing the BGW news spotlight right now. Frankly though, that story has been entirely eclipsed.
According to a number of credible reports from ParkFans members, Busch Gardens Williamsburg has sent out a survey asking park goers for their thoughts on the possible addition of a third SeaWorld Parks & Entertainment property in Virginia.
This proposed third gate would be a children’s amusement and water park themed to Sesame Street—effectively creating a sister park to SEAS’s existing Sesame Place Philadelphia. Hence, from this point on in this article, we will refer to this project proposal as “Sesame Place Williamsburg.”

Probably never—at least not exactly as depicted in the survey. This may seem obvious, but before we go any further, I want to be clear: This is nothing more than an idea SeaWorld is evaluating.
That’s not to say this isn’t newsworthy (because even the existence of this concept within SEAS is a huge deal), but it’s important to keep expectations in check. And since “repetitio est mater studiorum…”
It is likely we will never see this project come to fruition.

As mentioned above, this proposed Sesame Place park would be constructed in what is currently Busch Gardens Williamsburg’s handicap and preferred parking lot. A site plan of the proposed park provided in the survey is included below.

To put the map above into a little more perspective, here is the area in question on Google Maps.

So what does this proposed park feature exactly? Since there was not a comprehensive attraction list included with the survey, all we have to go on aside from the site plan included above are a few pieces of concept art.
As revealed in the site plan above, the park in question would feature four themed areas: The Neighborhood, Central Park, Forest of Fun, and Seaside. Below we’ll take as deep a dive as we can into each section.

This area of Sesame Street Williamsburg would act as the park’s entry area and as a “hub” for the rest of the park (think Mainstreet USA at Magic Kingdom). Below is a piece of concept art depicting an overview of the proposed “Neighborhood” area alongside an estimated field of view map to give you a better idea of what you’re looking at.

What do the concept art and site plan reveal about The Neighborhood? It appears that there is a healthy selection of shops and restaurants in this area of the park (as one would expect from a typical theme park “mainstreet” area). Survey slides for those two aspects of the park can be found below.

Additionally, there appears to be a large theater as well (the funnel-shaped building on the site plan). There is a slide in the survey that confirms the presence of a major theater in the proposed park as well.

If you look closely at the street down the middle of the area, there is a parade going on. Helpfully, the park included concept art for the parade in the survey as well!

Part of The Neighborhood that didn’t make it into the overhead concept art featured previously is the proposed park’s entrance. Once again though, the survey provides with a slide entirely dedicated to the entry gate!

Another attraction that appears to take up residence in The Neighborhood is a large character meet and greet space. The slide for that aspect of the proposal is included below.

Now, before we move on to Central Park, scroll back up and look at that original piece of concept art for The Neighborhood. Note the fabric pavilion in the bottom left corner…

This is an area of the proposed Sesame Place Williamsburg that the survey slides really don’t reveal much about. That said, as referenced immediately above, the concept for The Neighborhood gives us a hint at what Central Park features.
The fabric roof seems to belong to the relatively small circular attraction shown in the top left corner of the Central Park site plan. There isn’t any information to discern what exactly this ride would be, but there is a good chance it could be the park’s carousel. We know the proposed Sesame Place Williamsburg would feature a small carousel thanks to the rides slide (included below).

In addition to the circular flat in the top left of Central Park, there appears to be another new, larger circular flat ride on the bottom edge of the area. Considering the other two rides depicted in the rides slide above already exist in Forest of Fun (we’ll talk about that in a moment!), there’s really no way to know what this larger circular attraction could be.
Aside from a selection of trees and various small structures, there’s not much else to this area of the park in the site plan.

The layout of the existing Sesame Street Forest of Fun area inside Busch Gardens Williamsburg would stay almost entirely unchanged according to the site plan in the survey. The current entry path across from Escape from Pompeii would be removed and a new backstage area would separate the two parks from one another.
The existing attractions in this area all seem to remain in place as well. The concept art on the rides slide above suggests that rethemes are in the cards though. The children’s drop tower in the rides graphic appears to just be a retheme of the existing ride of the same type, Prince Elmo’s Spire. The Oscar-themed flat on the bottom left of the rides graphic seems to be a visual refresh of the currently operating Oscar’s Whirly Worms ride.
What is very noteworthy about Forest of Fun in the site plan is that it has nearly doubled in size. The area outlined in blue in the picture below would be new portion of Forest of Fun. 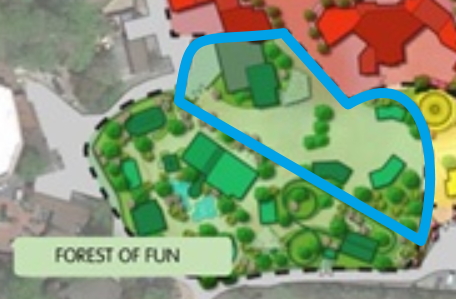 As you can see, this area of the site plan is very sparsely populated. It does seem to offer some room for a few additional flats if the park decided to build out its ride collection a bit more.

The final (and largest) section of the proposed Sesame Place Williamsburg is Seaside. As the name suggests, this is a children-focused water park.
The site plan seems to depict three slide complexes, a wave pool, and a large water play structure. The survey graphic for the water attractions is included below.

This slide is a bit more curious than the others we’ve seen. The lazy river suggested by the left-most picture does not appear to exist anywhere in the site plan.
There is another inconsistency with this section of the park too. If you look at the aerial concept art depicting The Neighborhood, on the right you can see the top of a water slide that also does not appear in the site plan.
Ultimately, these minor inconsistencies are almost certainly a result of different iterations of the project being meshed together for a survey. That said, it shows how cautious we should be with all of the information presented. Nothing in this survey should be considered even close to finished.

Our thoughts on this are far too extensive for this article. Within the next day or two Nicole will have a full article up explaining why we believe this project is great for SeaWorld Parks & Entertainment, Williamsburg as a tourist destination, and even Busch Gardens Williamsburg itself.

This post would have been impossible without a number of members of ParkFans.net who came forward to share their surveys. Thank you all for your time and dedication!