By Nicole Zachary Posted in Reviews on September 11, 2020 One Comment 5 min read

2020 has been a horrible year in a variety of ways. It has gifted us a pandemic, massive wildfires, hurricanes, killer hornets, and nationwide protests. I am writing this article in September instead of May, however, because 2020 also closed our theme parks and postponed and reduced Busch Gardens Williamsburg’s Food & Wine Festival, morphing it into this month’s Taste of Busch Gardens mini-event.

In the BeforeTimes, a team of us got together each year to sample and score all of the food being offered at the park’s tasty culinary adventure. With those assessments, BGWFans would publish a massive two-part article discussing the food, the booths, and the festival in general. In COVID-America, however, both the event and the tasting team were dramatically reduced. So, what you will find below is a singular report on our observations and scores for each of the specialty dishes that can be found around the park this month.

Before I go any further, I’d like to thank Renee, Gavin, and Zachary for joining me on this culinary expedition. They valiantly sampled 19 items at six booths in only four hours. It is also worth briefly mentioning those “booths.” No one should go looking for specially-themed kiosks, as everything was served out of regular food stands, which had been renamed for Taste of Busch Gardens. Honestly, this change is probably the reasonable result of the extreme budget constraints created by COVID and the 1000-person attendance cap.

Like last year, we used a 10-point scale. Based on our 2019 experience, however, we added zero to our range, giving us an easy mid-point. So, each dish was scored from zero (I never want that in my mouth again) through five (no reason not to eat it) to 10 (pure culinary ecstasy).

Given the limited number of offerings and the uneven distribution of items across the six locations, we have elected to limit our highlights to the overall highest scoring savory and sweet dishes. That said, we will provide some additional thoughts and all of the average scores in the roll-up below.

We ended up with a tie for first place in the savory category. Unsurprisingly the two winners were served at 2019’s Best Booth, Jamaica. In alphabetical order (because that seems the least normative), both the Gamba Fritters and the Jerk Chicken Sliders received a mean score of 7.75 out of 10. Although neither was the same as previous iterations, they were delicious.

The Gamba Fritters were the only seafood option on the menu, and to be honest the amount of shrimp we actually found in each piece varied wildly. That said they were still very tasty and were accompanied by the perennially delicious and tangy pickapeppa sauce. We did notice that the fritters were larger and not quite as good as in the past, and the sauce seemed to be separating. Those nitpicks, however, were not enough to cool our long-term love of this Busch Gardens Williamsburg Food & Wine Festival classic.

The Jerk Chicken Slider was another favorite of the tasting team. The meat’s spicy heat was well balanced by tangy slaw and sweet mango. Especially with this year’s slightly different preparation, each bite of this tasty sandwich offered a good variety of textures. Over the years we have been fairly critical of the park’s attempts to serve jerk chicken at their annual event, but as we noted last year, they really seem to have finally developed a great dish with this slider.

The Beignets edged out the Baklava with an average score of 7.5 out of 10. Everyone enjoyed these New Orleanian pastries more than the other fried dough option, the Greek Loukoumades but we would happily eat either. While we did find the beignets a little doughy, they were still soft and flakey. Our biggest complaint was the gooey sweet sauce, which lacked any specific flavor.

We also tried and liked both of the non-alcoholic drinks. The Bubble Tea, the reigning 2019 champion, once again claimed the top spot with a score of 8.5 out of 10. The milk tea, itself, is nice, but not super-interesting; the popping boba’s however, are fun and tasty. That said, we also strongly recommend the tart Strawberry Lemonade, which featured fresh sliced fruit.

Below you will find our thoughts about each booth, as well as scores for every dish. You may note a real disparity among the ratings. Most of the food was either great or terrible. As ever, we hope this review is helpful, when you go to the Taste of Busch Gardens event.

In addition to the Gamba Fritters and Bubble Tea, the judges enjoyed both the Bangers & Colcannon and the Baklava at the “Best Of…” booth located in O’Tators Irish Restaurant. The former had complex flavors, including nice herbs in the meat and a pleasant sweetness in the gravy, but was unfortunately burned. The latter was sweet and flakey, but the honey was not evenly distributed and the filling seemed bland. We found the Mushi-Gyoza generally good, but discovered inconsistencies between our two servings. We cannot recommend Siopao at all, unfortunately. This steamed Filipino pork bun seemed to be mostly Wonderbread-like dough, with little flavor or filling. 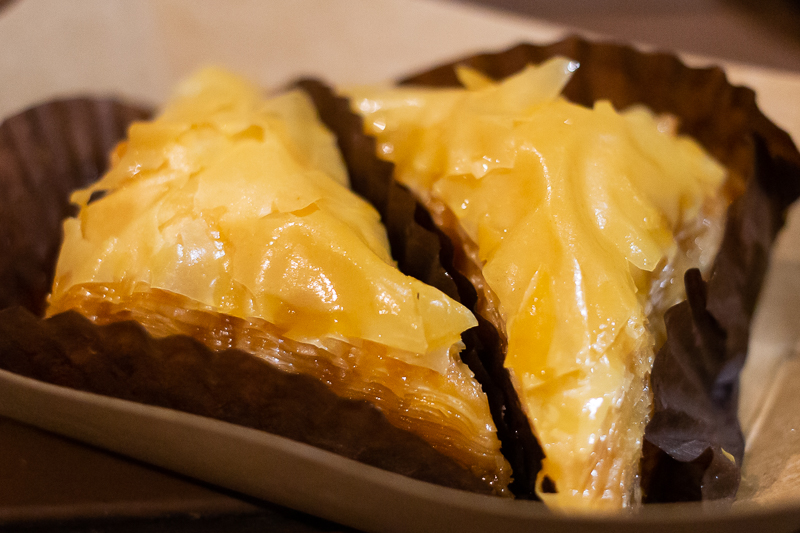 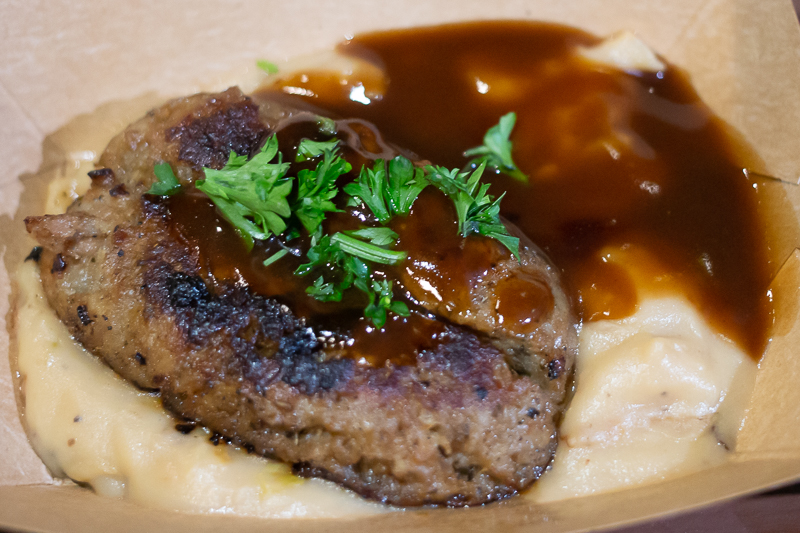 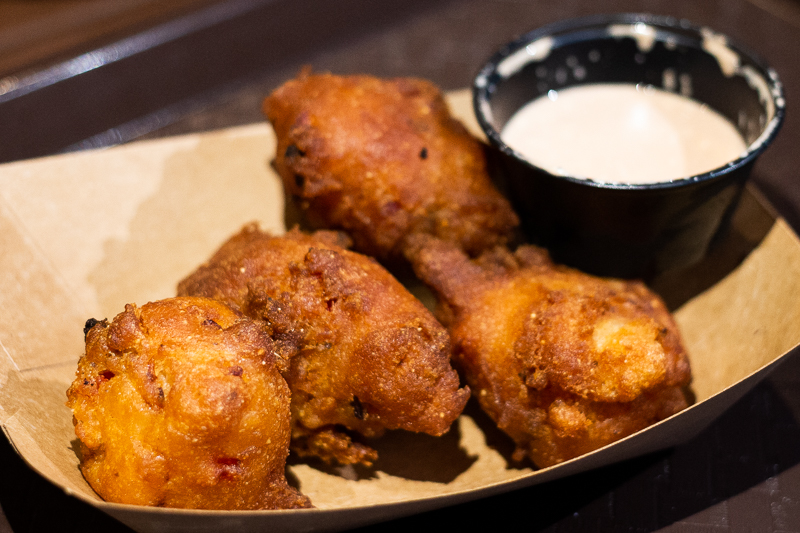 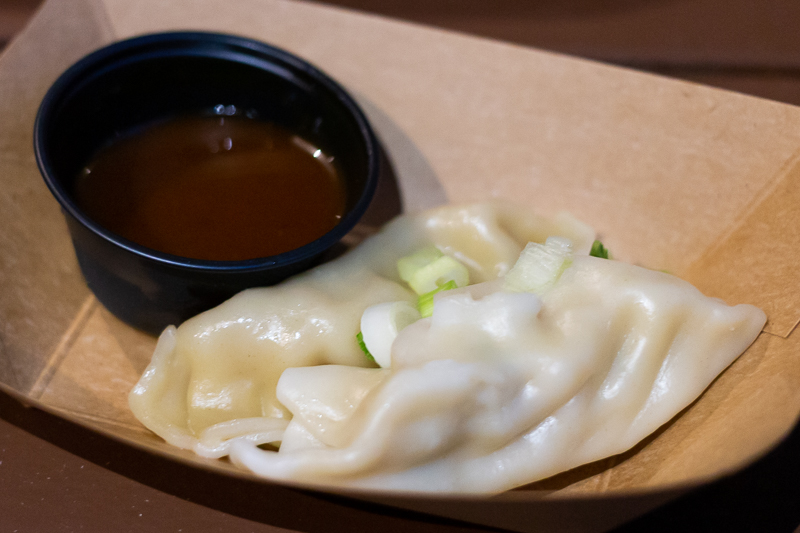 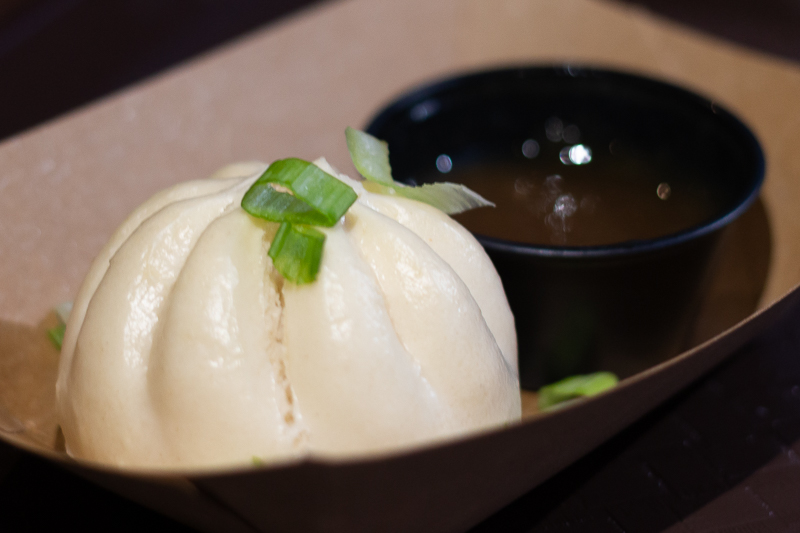 Trapper’s Smokehouse Show Grill is home to another great booth: Chef’s Choice. The high-scoring Jerk Chicken Slider can be found here, as can another flavorful favorite: the Brazilian Churrasco. This grilled beef dish, while smaller than last year, was tender with a lovely herby sauce. The Creamy Mushroom Risotto was not fantastic, but we found it to be a nice enough side dish. 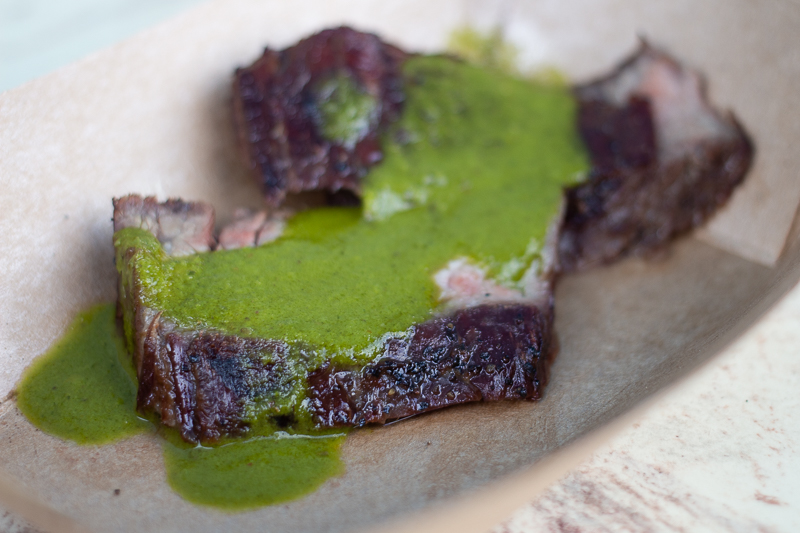 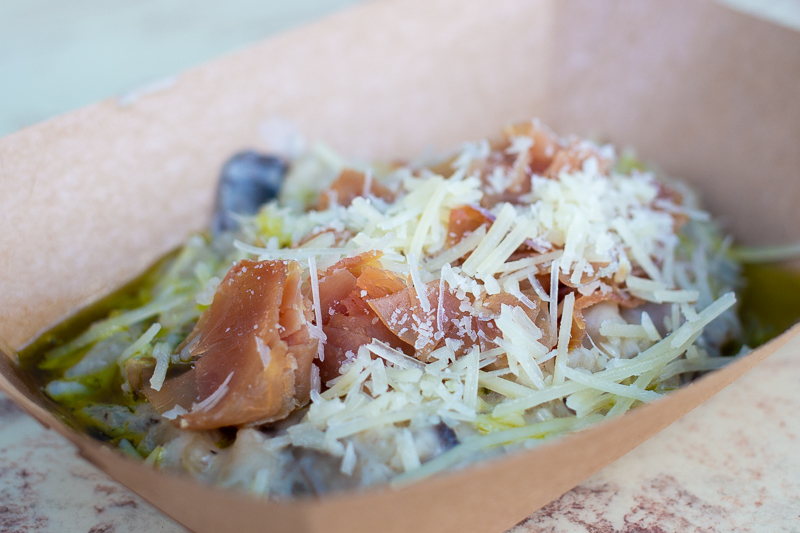 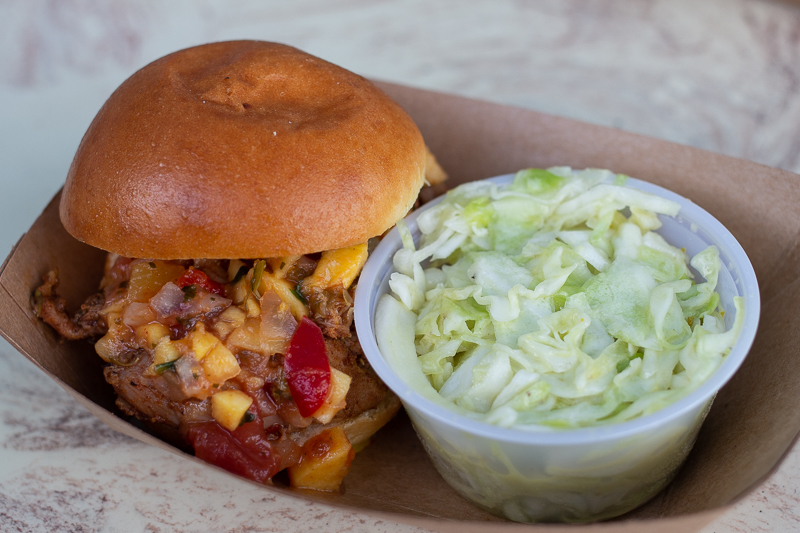 The park has repurposed Cafe Lulu as a sweetshop with mixed results. As already noted, we enjoyed both the Beignets and the Strawberry Lemonade. The other two dishes, however, did not meet with quite as much approbation. The Cannoli was the same adequate dessert, usually found at Marco Polo’s Marketplace during the main season (remember when we had those?). The Cookie Dough Cone was… unexpected. I am someone who enjoys snacking on cookie dough and I have been known to order ice cream just for the cone. So, in theory this dessert was made for me. It turns out, however, that the combination desperately needed something cool and creamy to cut the dry, doughiness. Additionally, none of us were expecting peanut cookie dough, so that first bite was a bit startling. 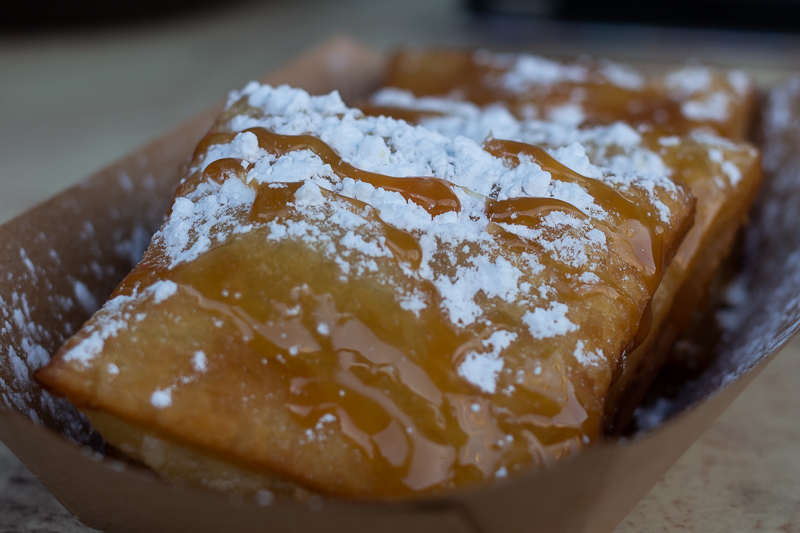 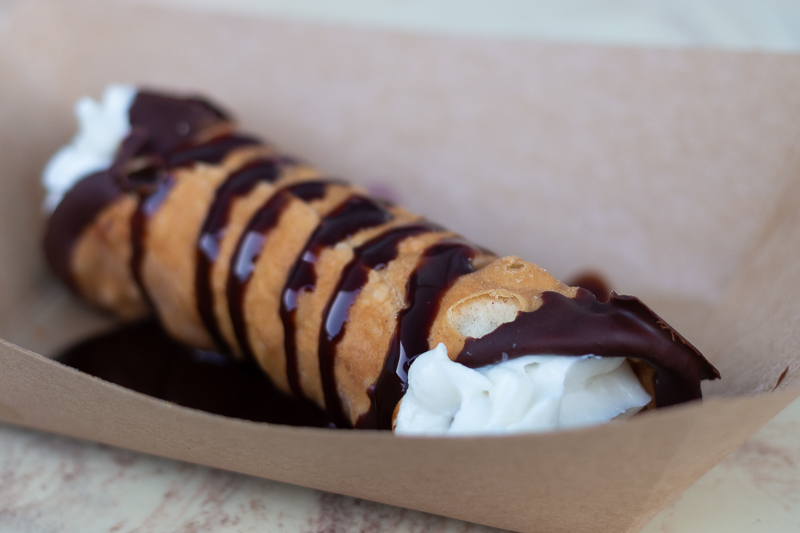 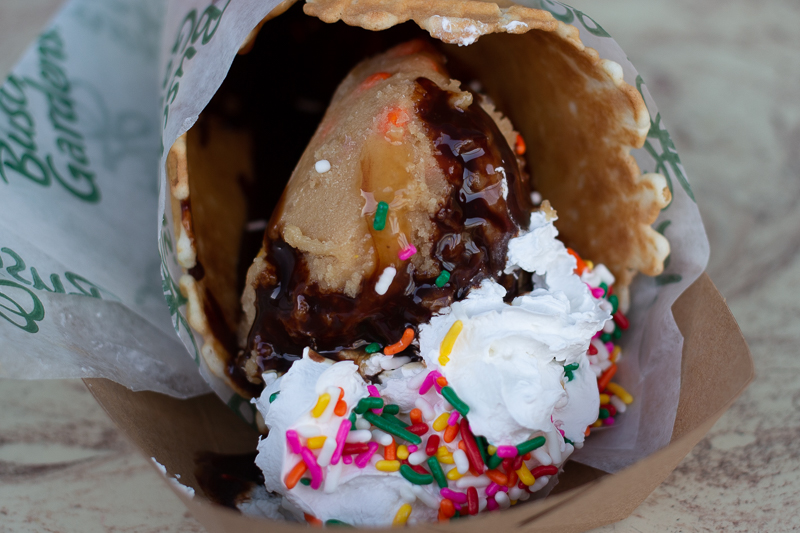 If you decide to grab one of the many interesting beers at Grogan’s Pub, do not give into that twinge of curiosity about the Charcuterie Plate. Seriously. Grab your brew and find a snack somewhere else. Anywhere else. The singular dish at this event location didn’t receive the team’s lowest score mostly because of the pickles and mustard. The bread wasn’t bad, because it did not exist. The slimy meats, however, were varying degrees of unpleasant and should be avoided at all costs. 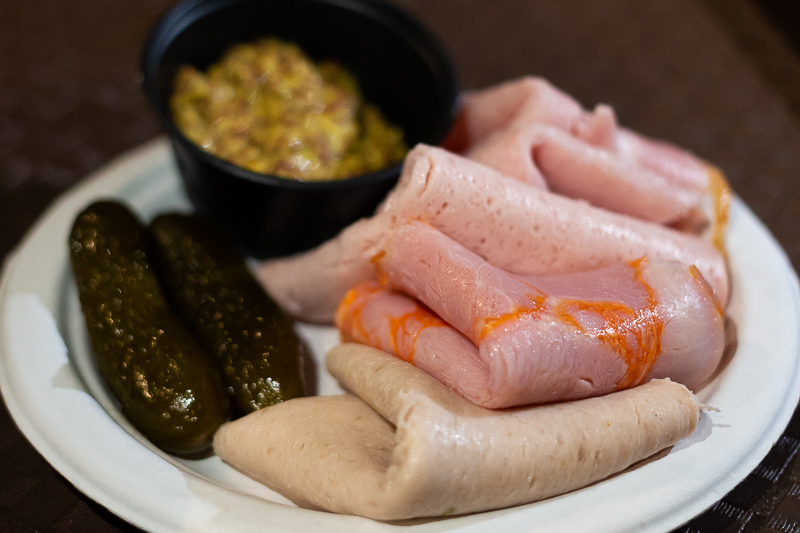 If you really want fries, grab either the English or Irish Frites. You will recognize them from the regular Les Frites menu. We strongly recommend against the German Frites and would physically prevent people from ordering the Italian Frites. The German currywurst admittedly tasted better than it looked, but that was hardly a very high bar. The Italian Frites, however, were even more disturbing. As a group, we were unable to come up with a single nice thing to say about the decision to dump metallic, marinara sauce and coagulated cheese on innocent french fries. The entire dish was weird, but the aftertaste was unforgivable. Just don’t eat this. 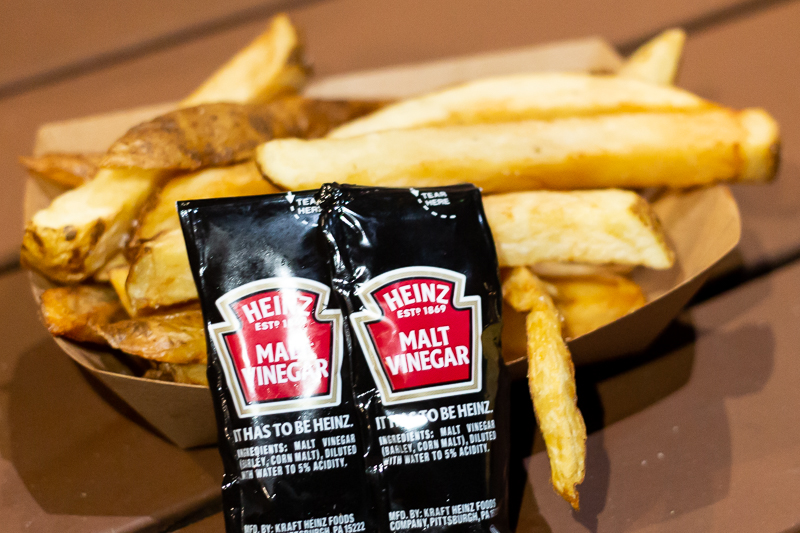 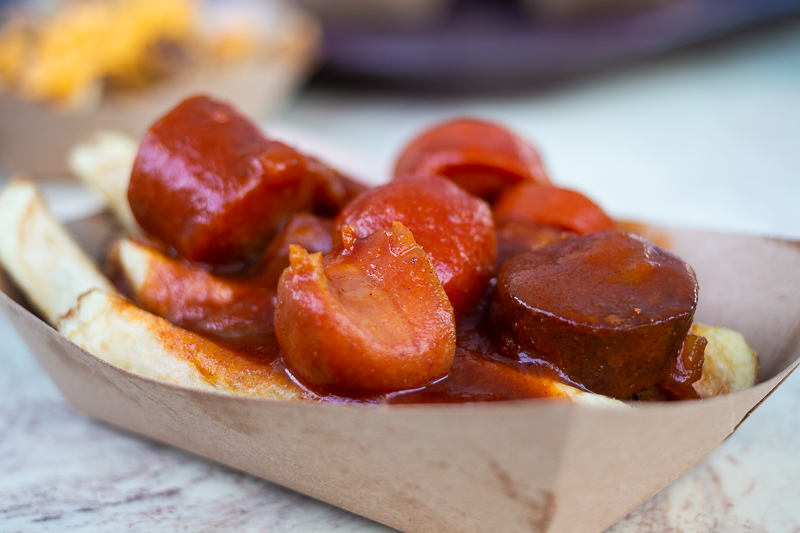 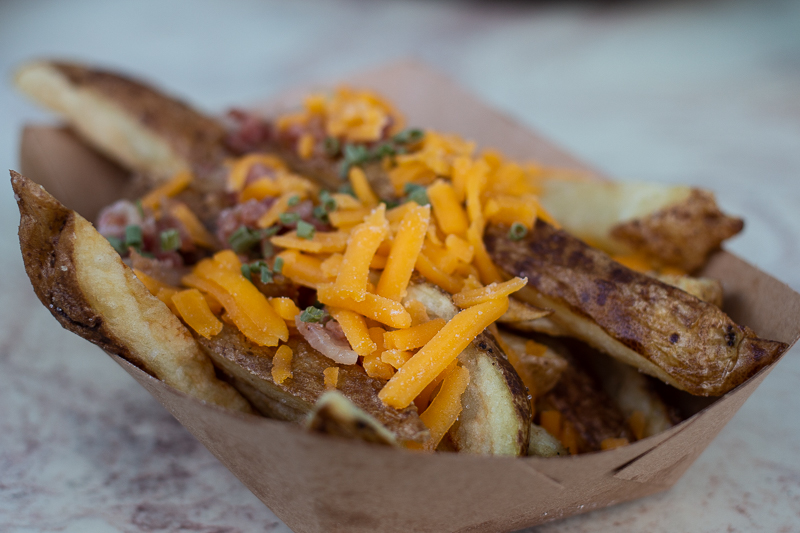 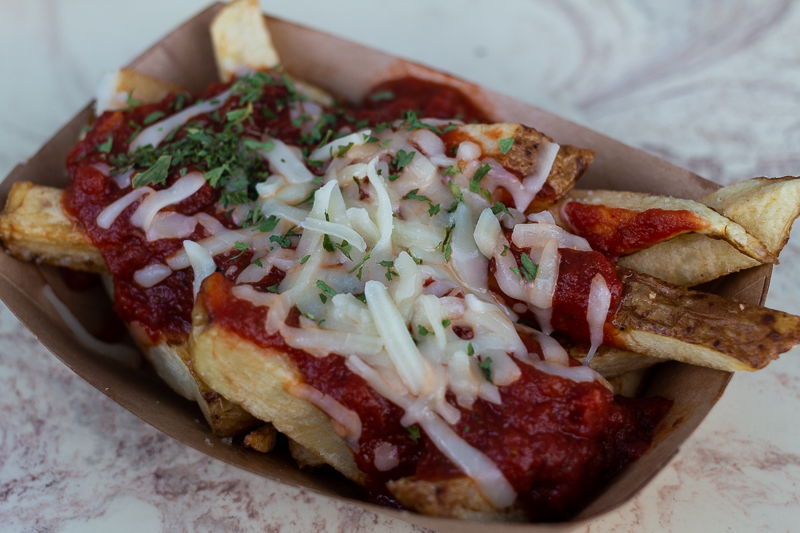 Setting aside the puzzling choice to waste money creating a special event sign for one, duplicative dessert, in addition to its normal fare, Three Rivers Snacks will sell you Loukoumades. While we did not find these honey-coated, Greek fried dough balls especially interesting, they were fresh and warm, and we enjoyed them. 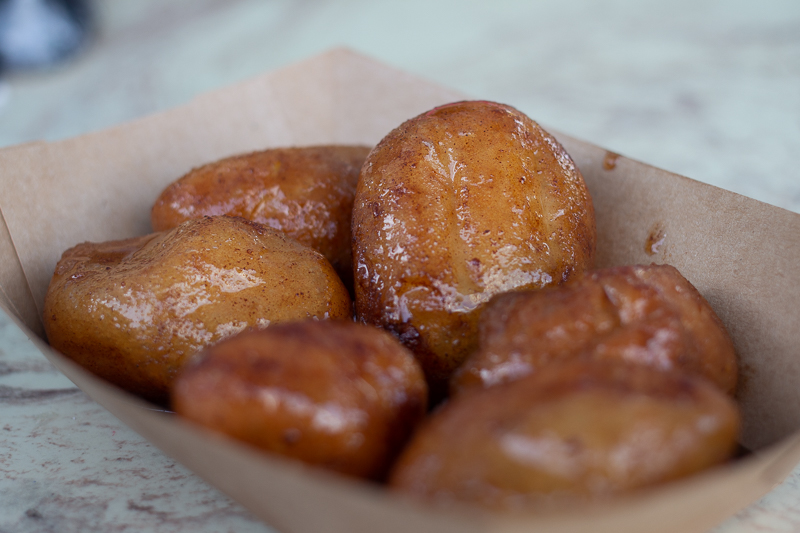 We hope that next Spring, with 2020 safely in the rearview mirror, we will be able to bring you our traditional review of the next full, parkwide Busch Gardens Williamsburg Food & Wine Festival. In the meantime, to keep up with BGW mini-events, attractions, and news, like us on Facebook, follow us on Twitter and Instagram, and join in the discussion at the ParkFans Forum.