What do you do, when you realize it is going to snow the first weekend of Busch Gardens Williamsburg’s Mardi Gras event? Do you postpone your review of the 19 themed dishes until the following Saturday? Do you decide no one really needs your opinions of this entirely custard and balsamic free event anyway? Well, if you are BGWFans, you find someone else who is also available Friday afternoon, and attempt to eat everything before the storm arrives.

So, in service to all of you, Zachary, ParkFans’ Belsaas, and I bundled up and braved the weather and the roads. Following our established process, we tasted and scored everything.

Before we dive into the specifics though, we wanted to provide an overview of our thoughts. Coming away from the event, our impression was that the food was generally very good. We would have liked to see more variety, but many items seemed well-executed (to our non-NOLA taste buds), and we were very happy with the prevalence of spice and variety of textures.

Since this is a much smaller event than the annual Food & Wine Festival, we decided against our usual Best in Booth and Taster’s Pick recognitions. We did, however, select our favorite dishes from across all six booths. Based on both the scores and our discussions, we enjoyed these two offerings the most:

I want to pause here to take a quick detour to discuss the concept behind the event, itself. As fun as a Mardi Gras party obviously is, it seems just a bit odd in a European-themed park, no? Well this is the question the three of us discussed, as we took the Skyride back from Rhinefeld.

The conclusion we reached was that expanding the theme from a strictly New Orleans Mardi Gras celebration to a multinational exploration of Carnival would better suit the park and relieve some of the monotony of the event. For me at least, one hamlet covered in purple, green, and gold steamers and serving Cajun and creole-inspired dishes is enough.

After doing some (very quick) research, I would propose that in the future BGW theme each hamlet to a different city’s event. I think Cologne, Venice, and Rio de Janeiro would be ideal additions. They all have major festivals and the first two suit the park perfectly. In fact, Cologne is on the Rhine River and the Carnival of Venice particularly features masks, which are already sold in BGW’s San Marco shops.

Below you will find the average score of each dish out of ten, as well as highlights from our tasting notes. Everything has been grouped by booth, and Zachary has included photos of each dish, as it was served to us. Unfortunately, there are no descriptions on either the BGW website or in-park signage, so we can’t provide those.

For reference, we mentally calibrated our scale following these general guidelines:

I want to emphasize that we made no attempt to judge authenticity, since none of us are from New Orleans. Rather, we assessed how each dish tasted, independent of its similarity to food you would actually find at Mardi Gras or in the Big Easy.

There were no “refreshers” (non-alcoholic specialty beverages), and we decided against reviewing the cocktails (partially in light of the drive home in the snow we all faced). So, this article will only discuss the food offerings.

As always we caution our readers that the quality and sometimes composition of BGW specialty dishes vary wildly. A plate that inspires culinary ecstasy one visit could cause a gag reflex the following week/day/hour. So, take this guide as our best snapshot of our experience on the first day of the event.

Located in Oktoberfest, this outdoor stand primarily serves cocktails. We found, however, two snack items that notionally would be perfect with a beverage. We would recommend against this plan, however, unless you are really committed to grabbing something small to eat.

Of the two, we would suggest the Crawfish Dip, which tasted like generic, and slightly bland, crab dip. Unless you hate money, we can see little reason to purchase the violently overpriced Cajun Snack Mix. It consisted of bland, unseasoned mini pretzels, rice Chex, and pecans. 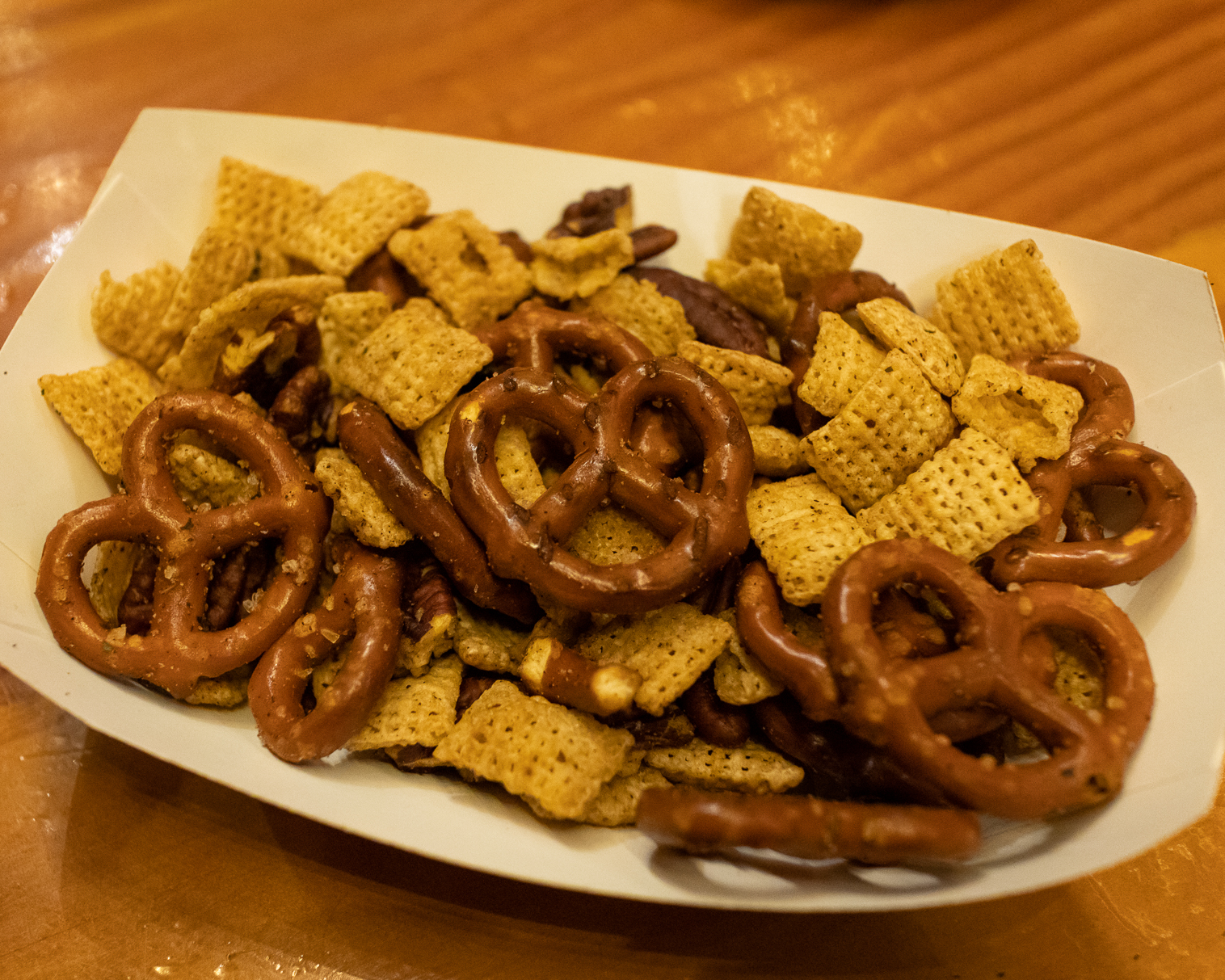 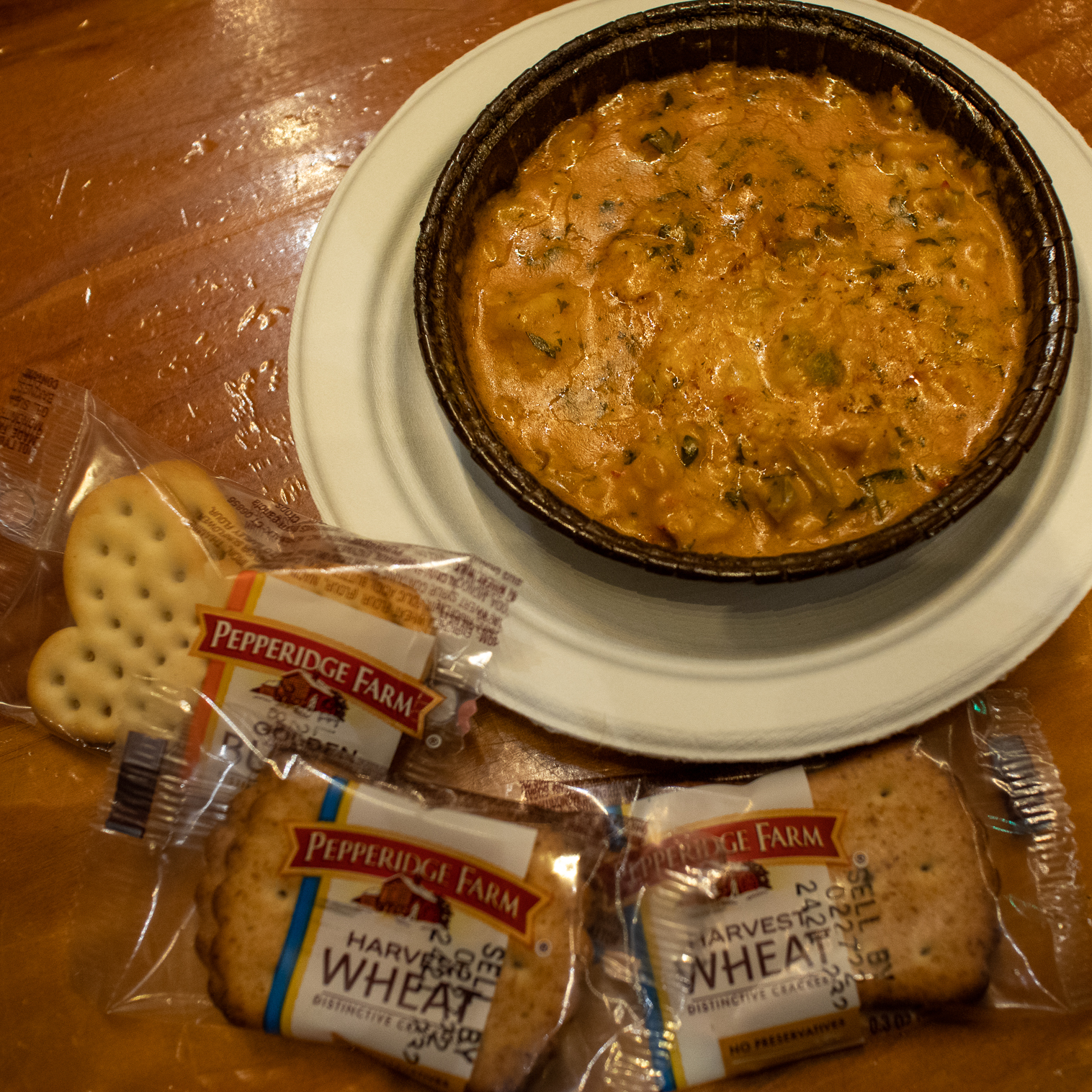 We would also recommend skipping the savory dishes at this quick service restaurant in Aquitaine. The beignets weren’t bad, and were definitely better than the ones we tried at Das Edelweiss. We wish, however, they were more like the version we had at the Food & Wine Festival, which had more vanilla and seemed more consistently prepared. That said, they were fluffy and nicely coated in powdered sugar and caramel.

Moving on to the savory options, do not order the Jambalaya. No really, just don’t. Our singular experience was of a mushy lump of salt that coated our mouths and made us regret our life choices. I think I briefly smelled the overcooked shrimp, but none of us actually tasted it. The Cajun Sausage and Grits was slightly better, but far more confusing. The grits themselves were buttery and creamy. The sausage was fine; we think they were using the same type throughout the event. On that base, however, BGW unaccountably decided to dump a red sauce that seemed like marinara. It tasted as unappetizing as it looked. 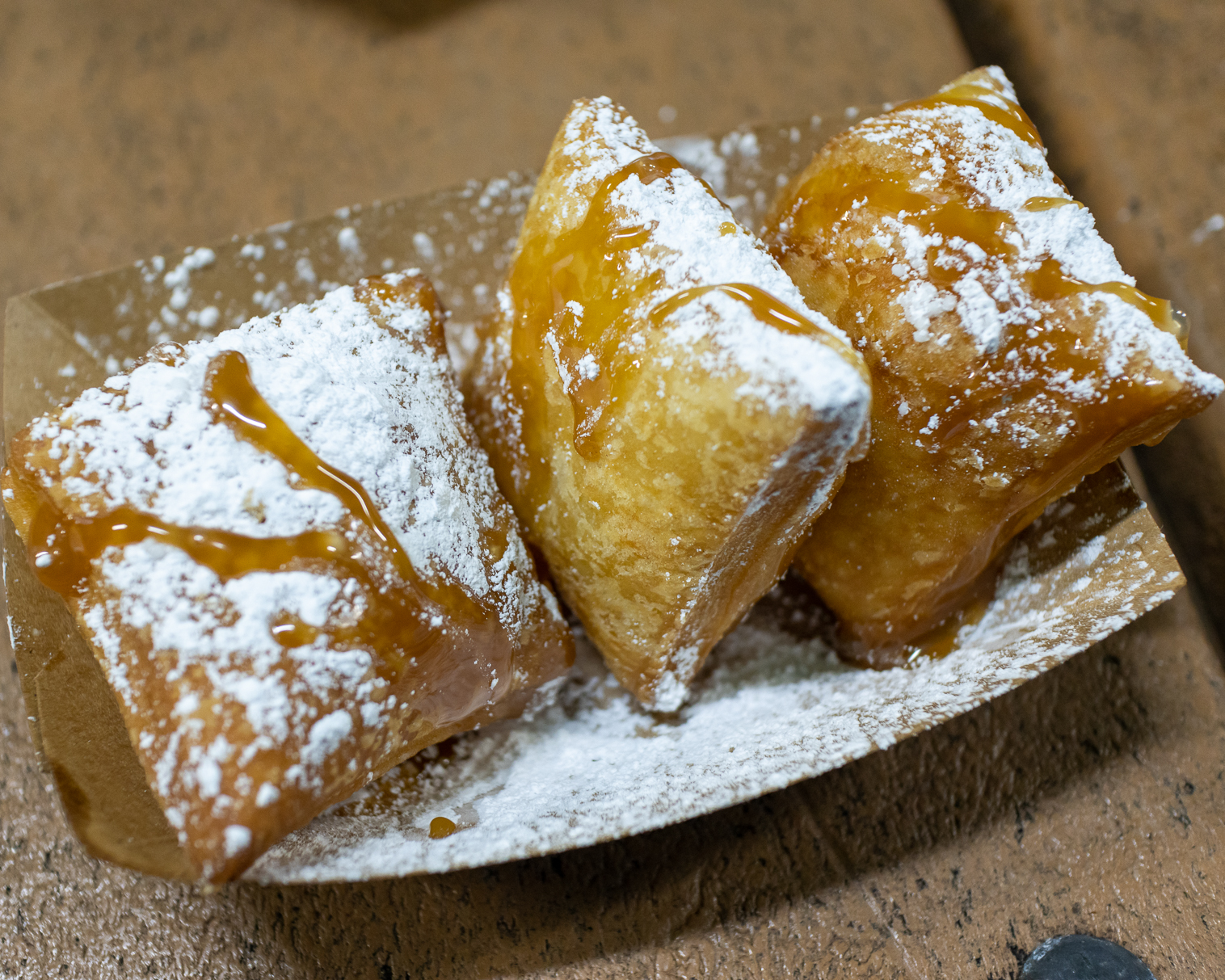 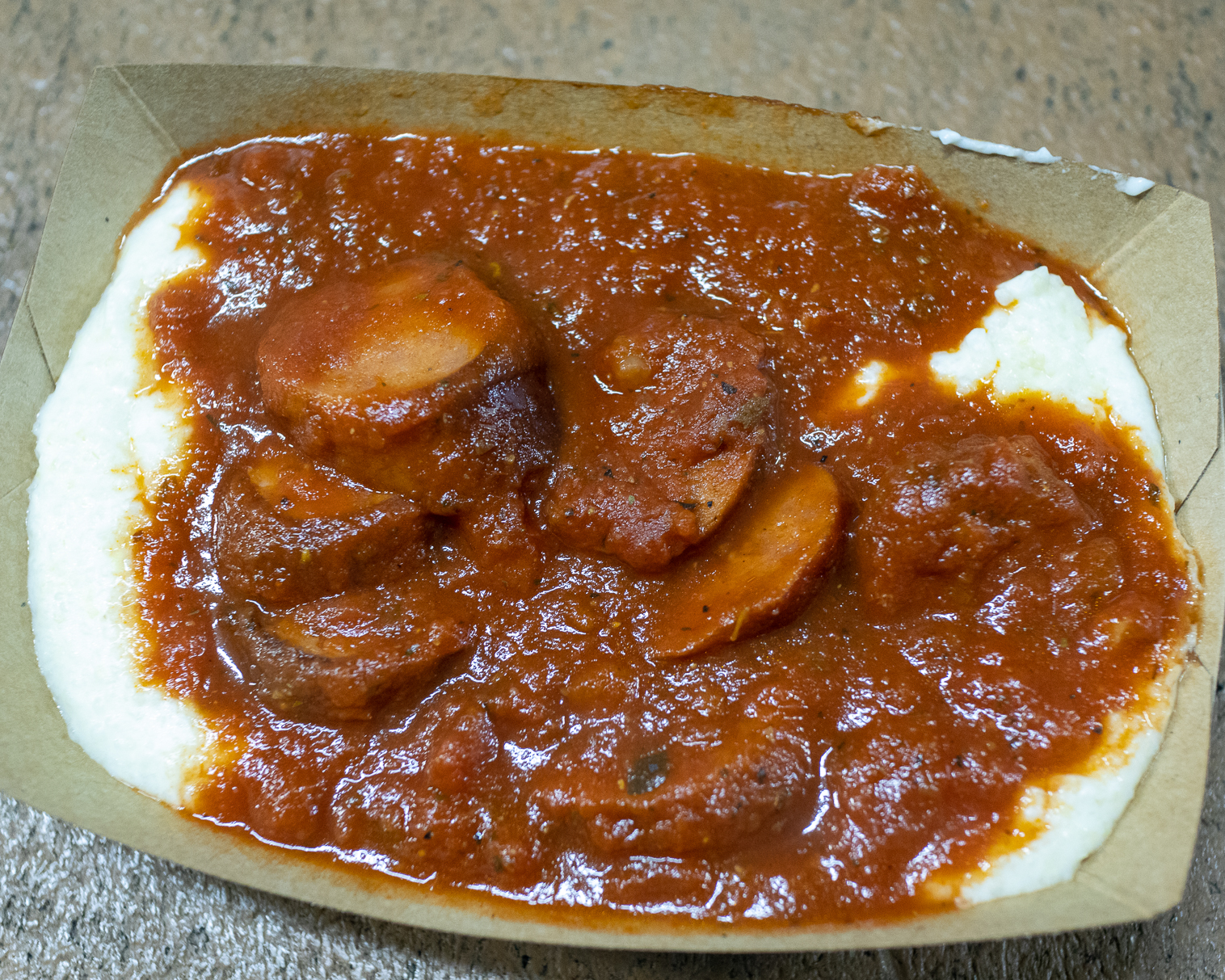 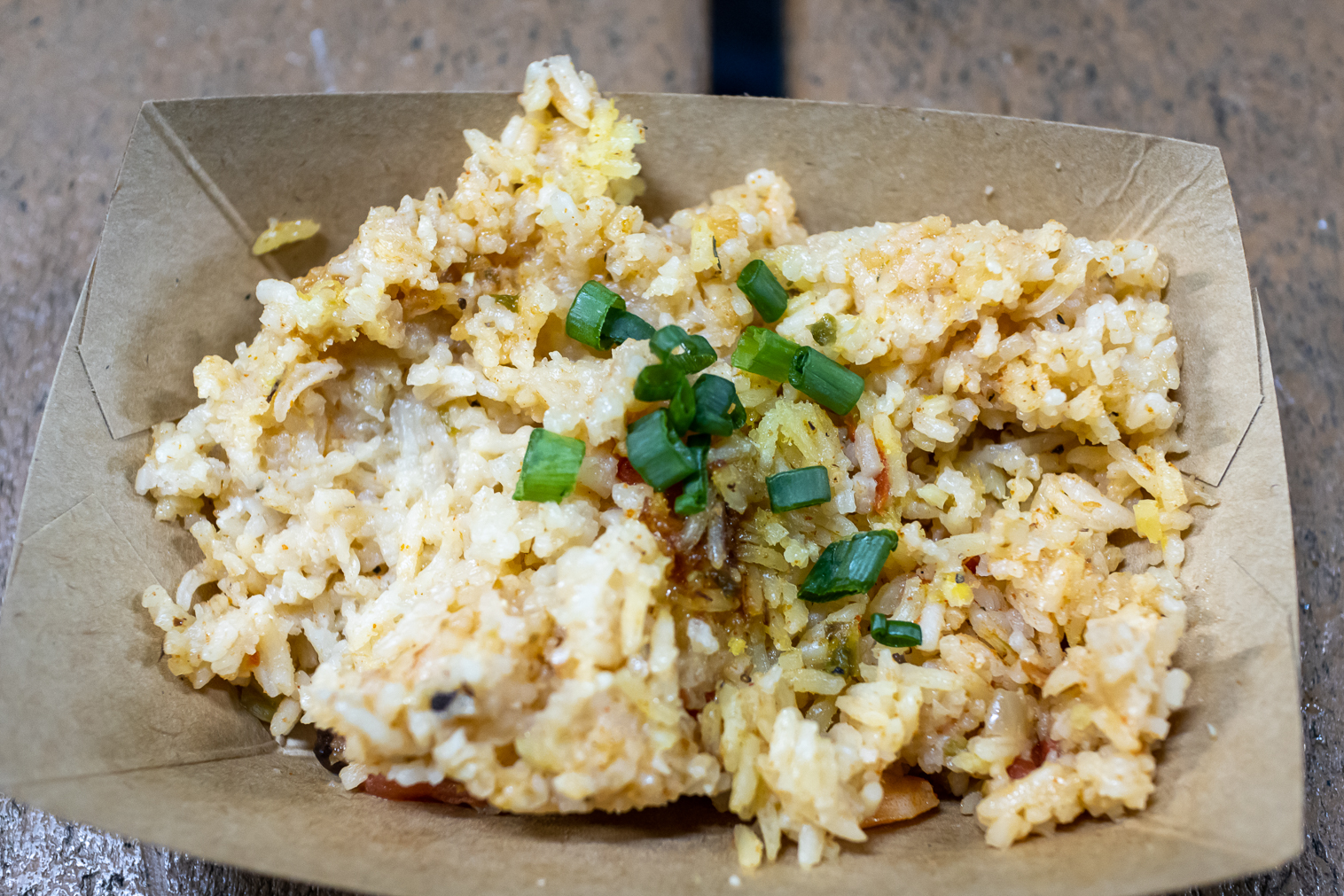 This temple to sugary goodness is located in Rhinefeld and is an important stop at BGW’s Mardi Gras event. Here you will find our Best in Show Sweet winner, the Mini Mardi Gras Funnel Cake. This amusement park staple was individually sized (why isn’t this available during the main season?) and topped with a creamy icing and a raisin and pecan sauce, neither of which was too sweet. Our only warning is that the staff didn’t seem to know which toppings to use. Hopefully, however, that was just a first day training issue.

We were not as excited about the other desserts. The beignets were oily and appeared to have been sitting in some kind of box under the counter. The Bananas Fosters Cheesecake was disappointing, as well. The sauce tasted overwhelmingly of alcohol burn, the cheesecake itself was not a good representative of any of the traditional styles, and the flavors did not meld well. Finally, the pretty and colorful King Cake Cinnamon Roll had a lovely cinnamon flavor and the thick and sweet icing will appeal to many, but the bun, itself, was like a round, cold brick. 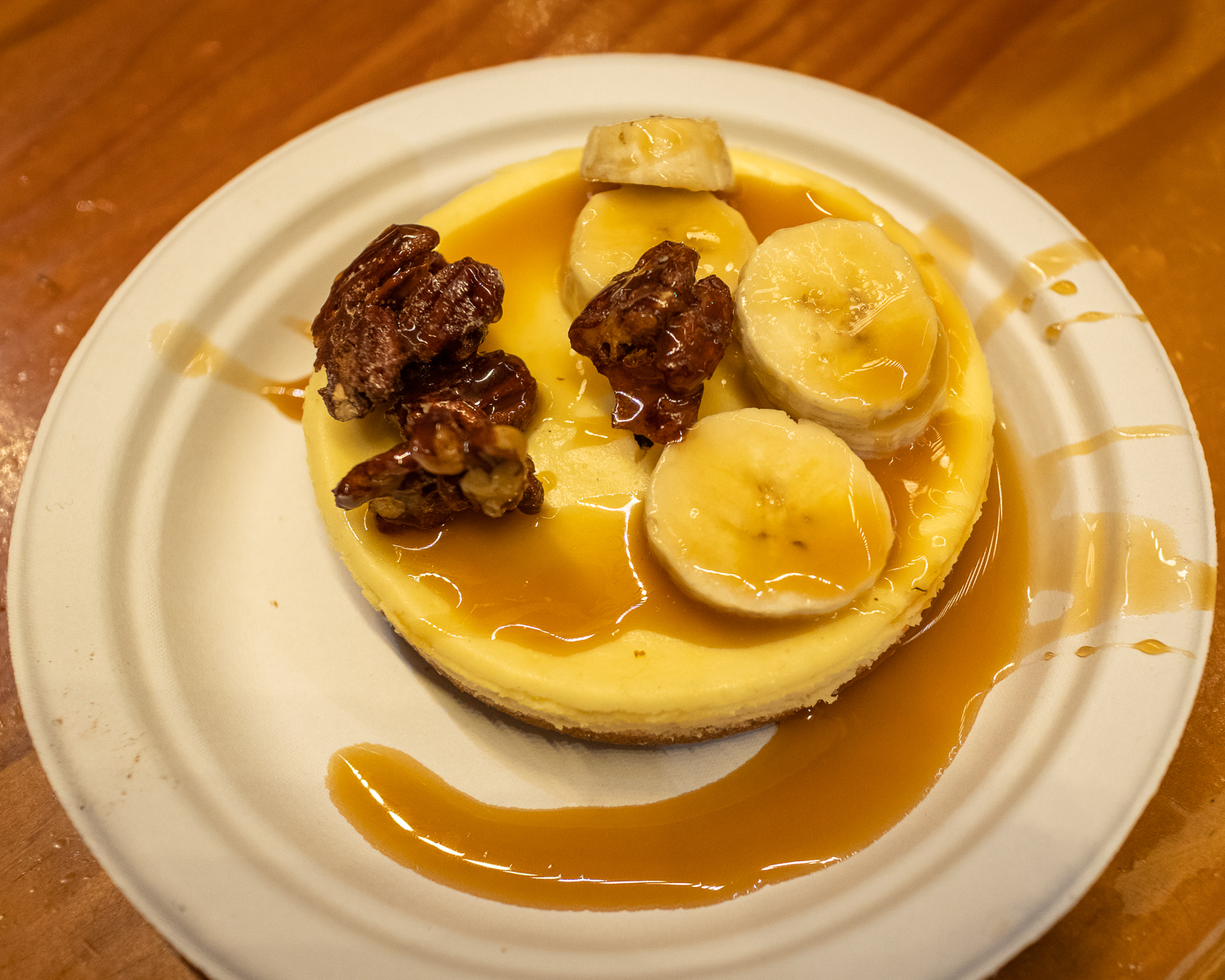 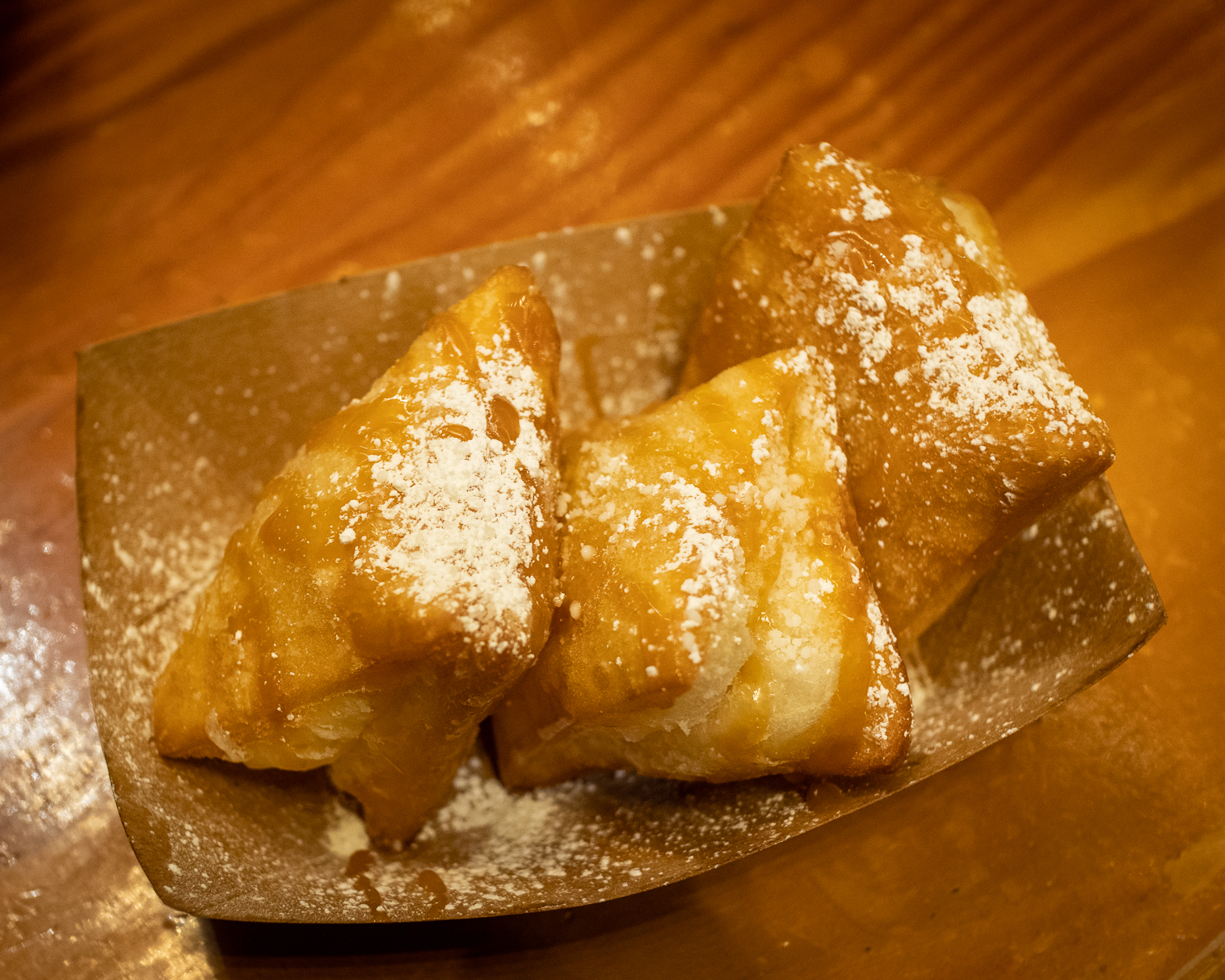 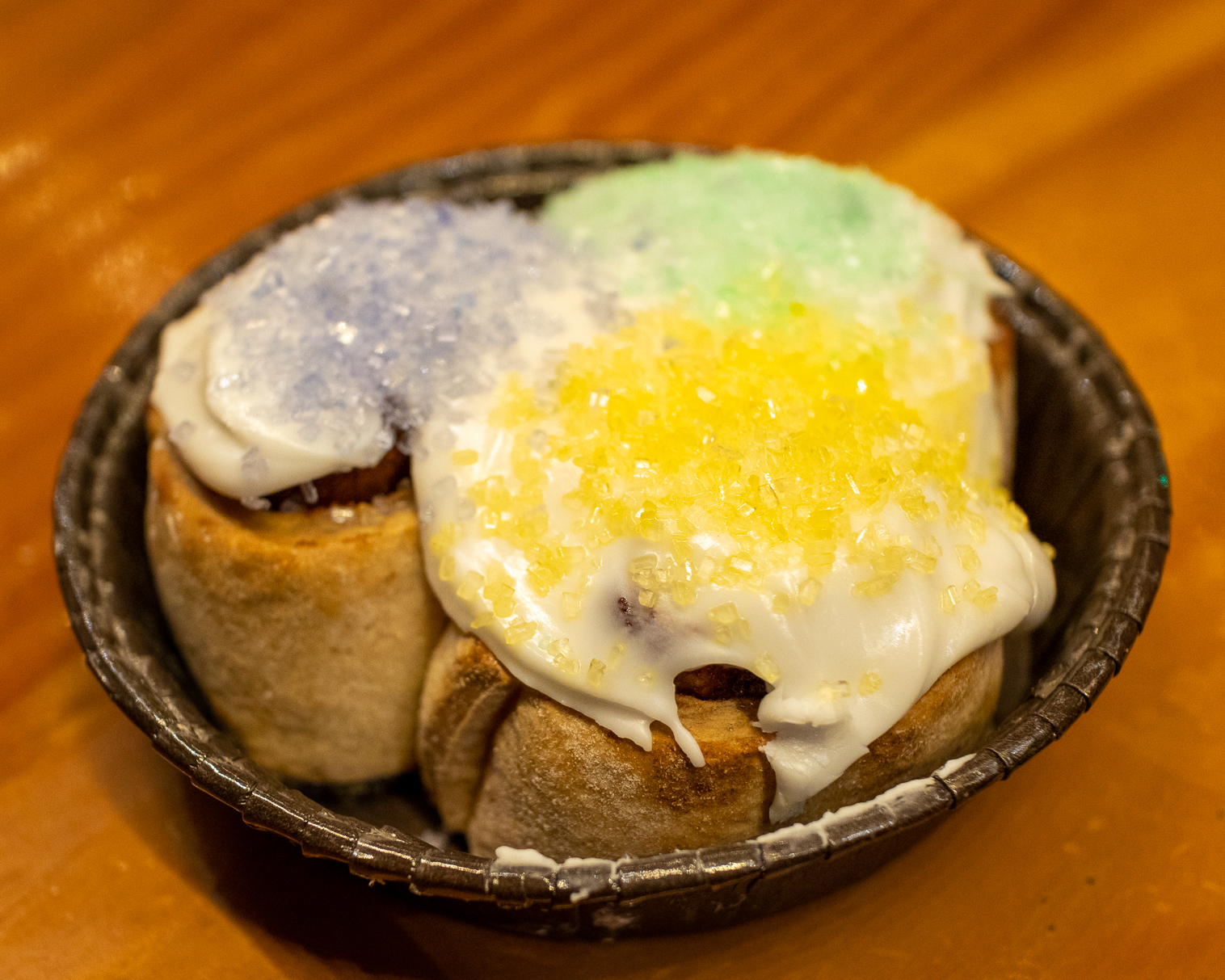 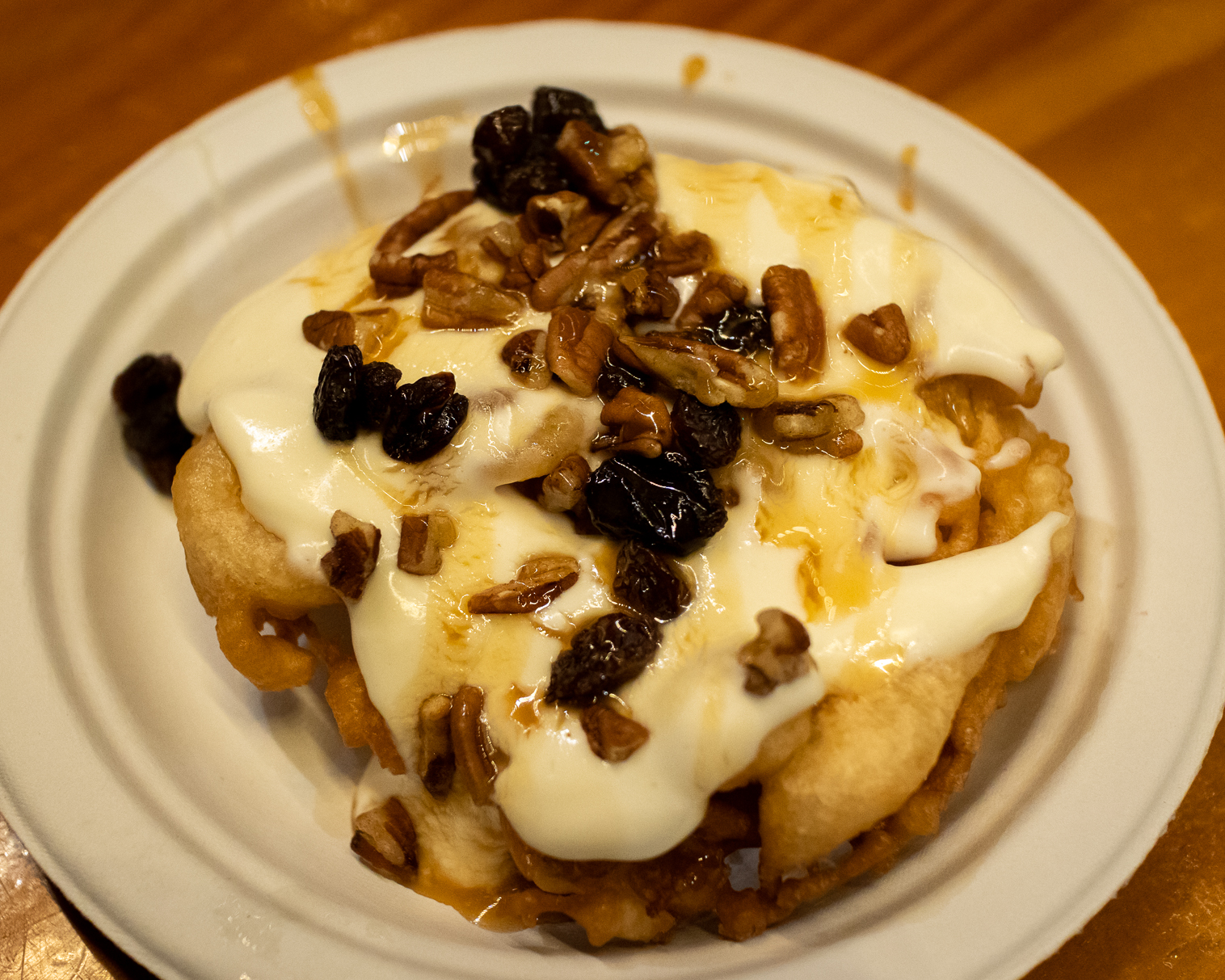 If you only have the time (or inclination) to visit one food booth, Killarny’s quick service restaurant is the easy choice. It boasts our Best in Show Savory selection, the Shrimp Etouffee, which featured a peppery sauce served over well-cooked rice. Several of the dishes at this location were built around that rice, in fact, which was neither too mushy nor too hard. We also enjoyed the Red Beans and Rice and the Chicken and Andouille Gumbo, both of which had well-cooked components and distinct flavors.

The Shrimp Po’ Boy, however, tasted to me like lettuce and bread. Everyone agreed the roll overwhelmed the fried shrimp, and we all would have preferred more of the tantalizingly tangy sauce. The Cajun Hushpuppies were difficult to score. Although there is nothing “Mardi Gras” about them, we have to admit that they were without a doubt the best bacon and cheddar hushpuppies we have ever eaten at BGW. They were filled with chunks of meat and perfectly fried. For some reason, however, they were served with what tasted like Russian dressing, which simply did not pair well with the fried cornmeal balls (where is the Gamba Fritter dip, when you crave it?). The Fried Okra tasted as you would expect, and seemed to have more texture than flavor. It was paired with a nice, mild sauce.

BGWFans Pro Tip: Use the unnecessary hushpuppy sauce on the po’ boy; this will improve both dishes. 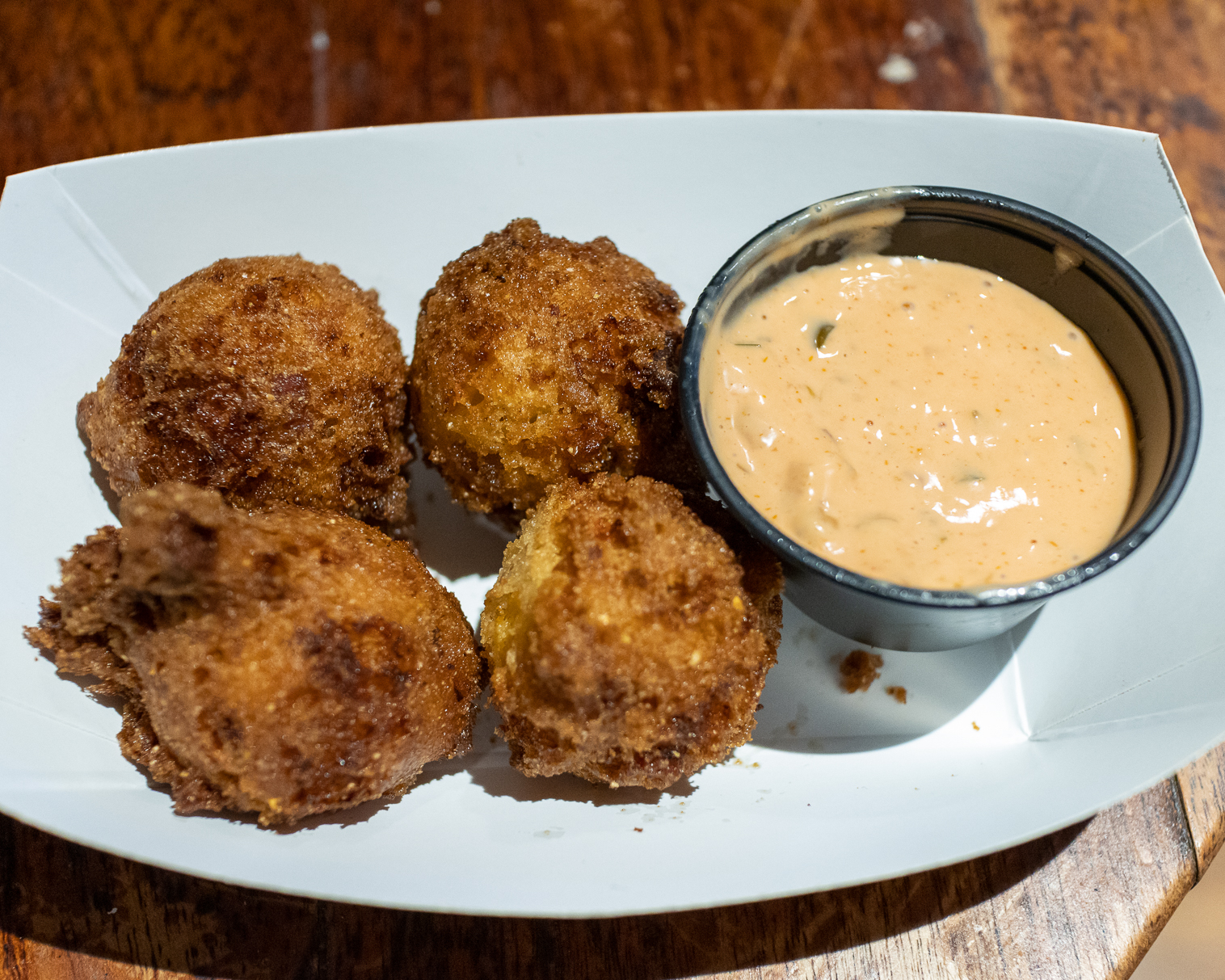 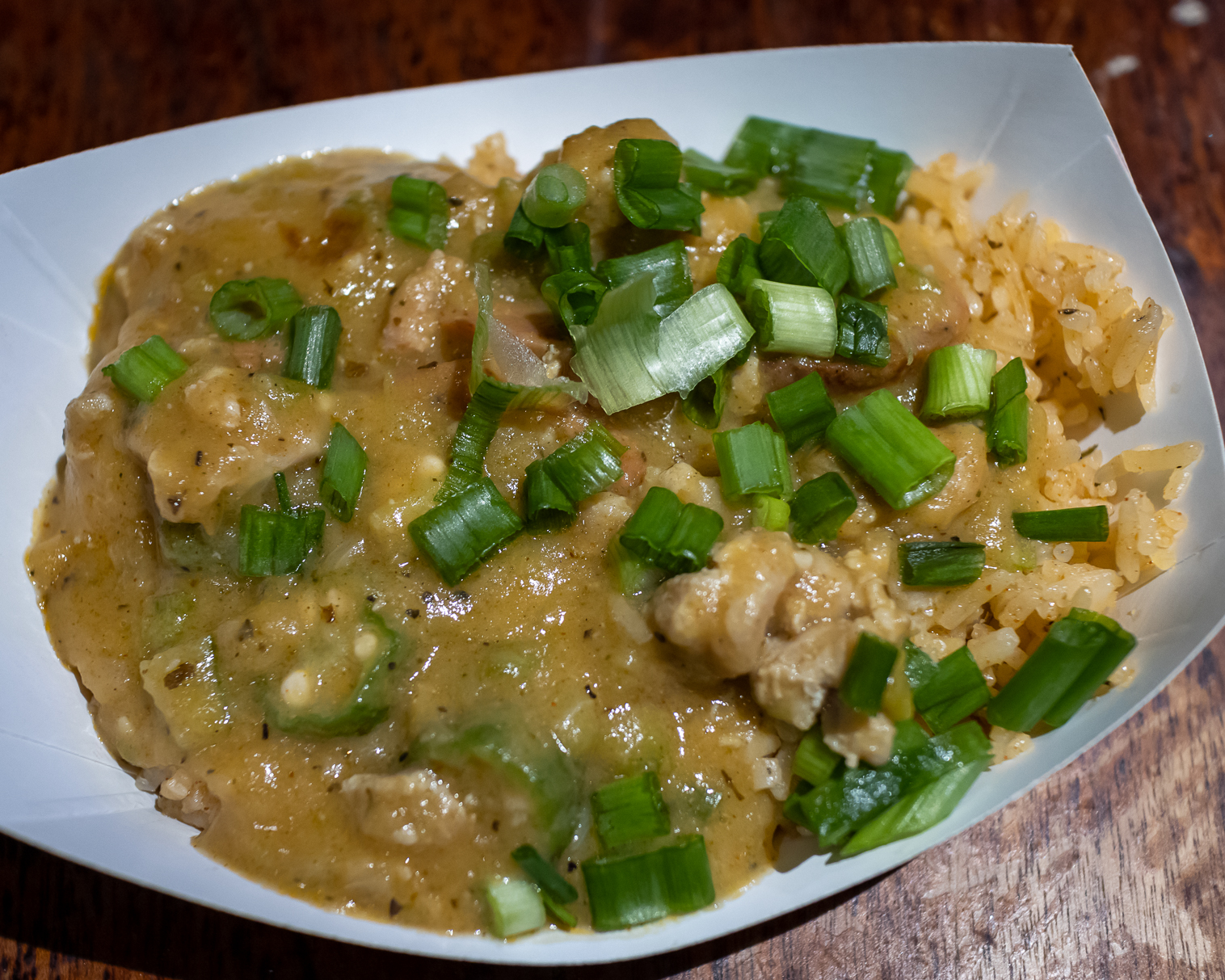 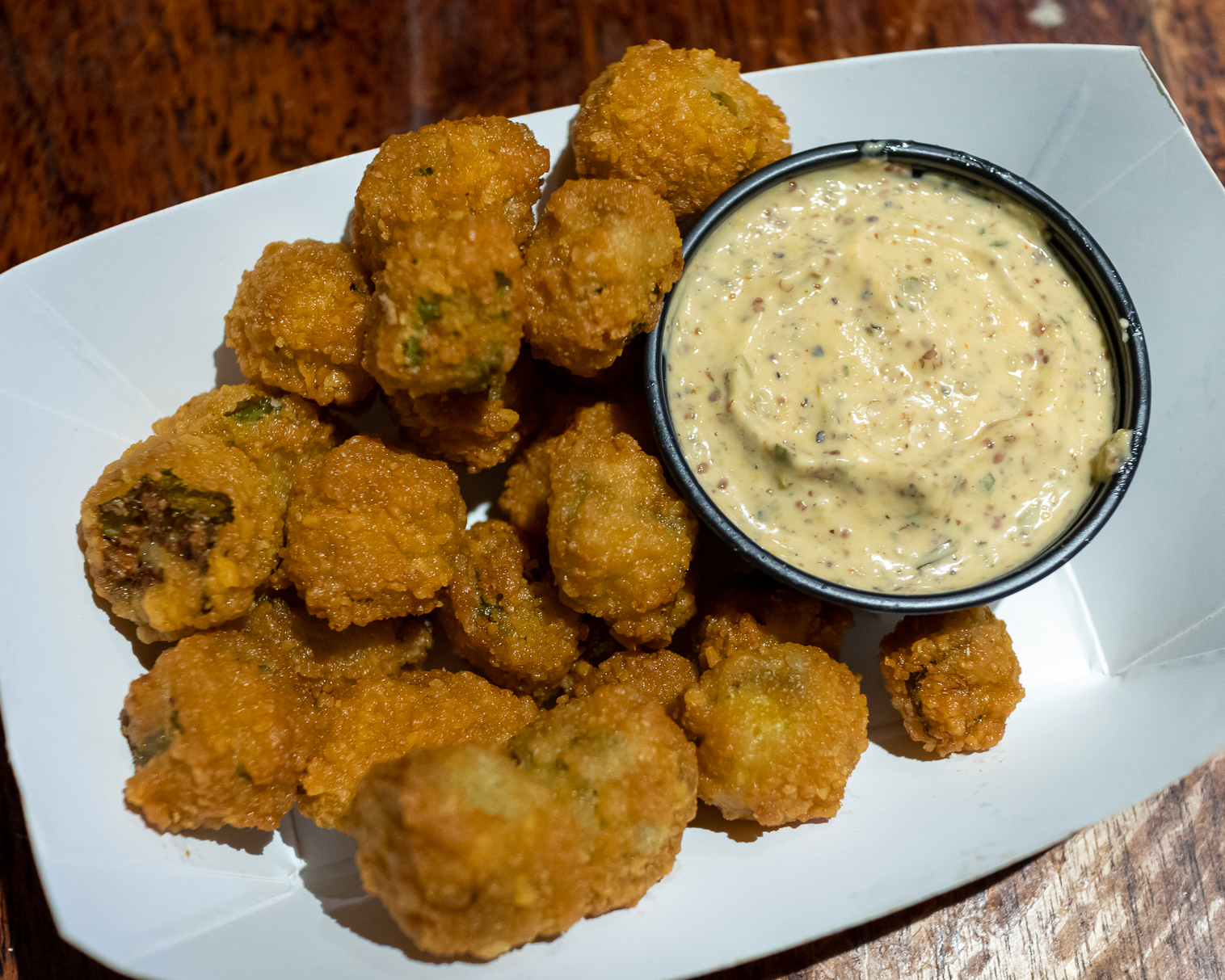 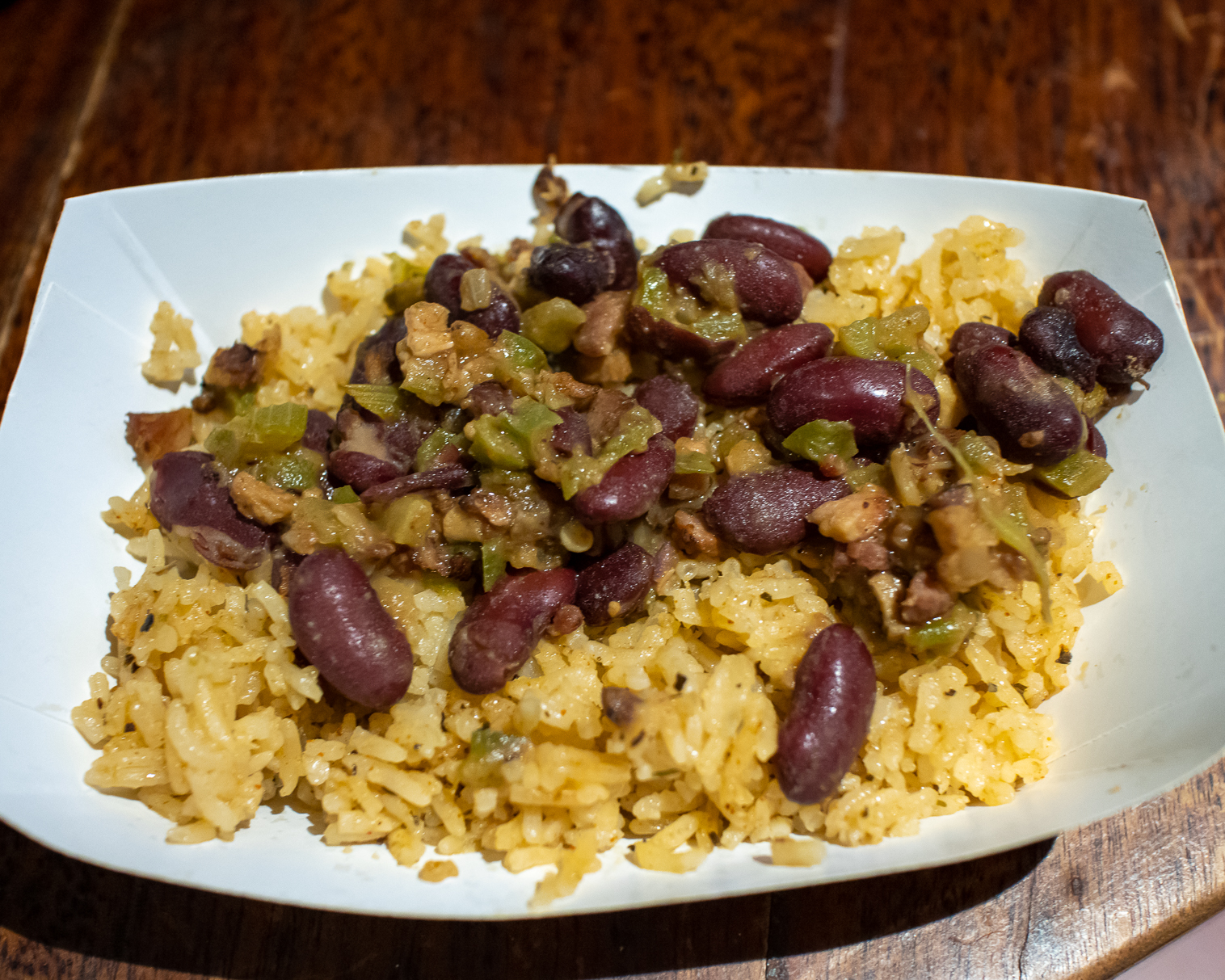 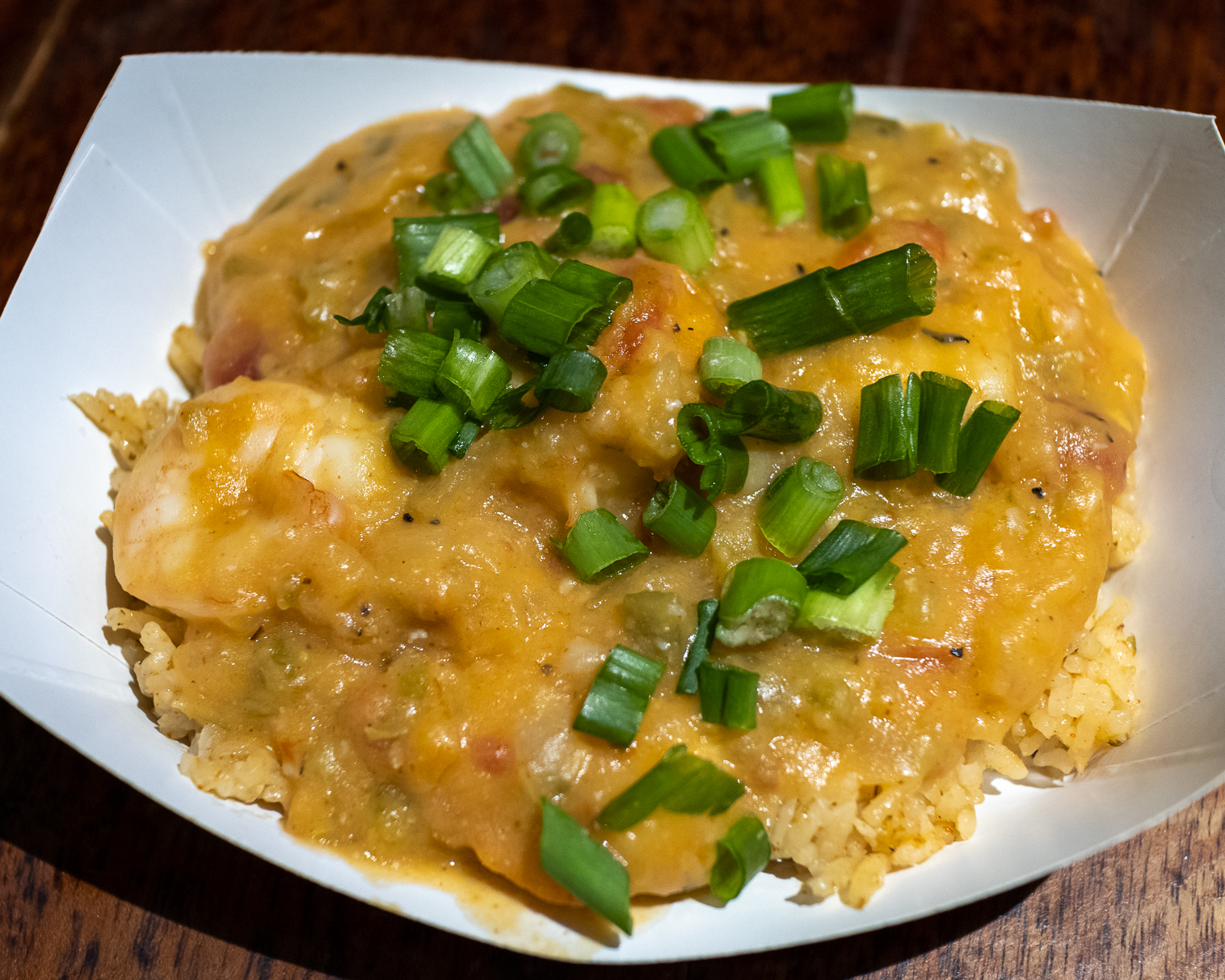 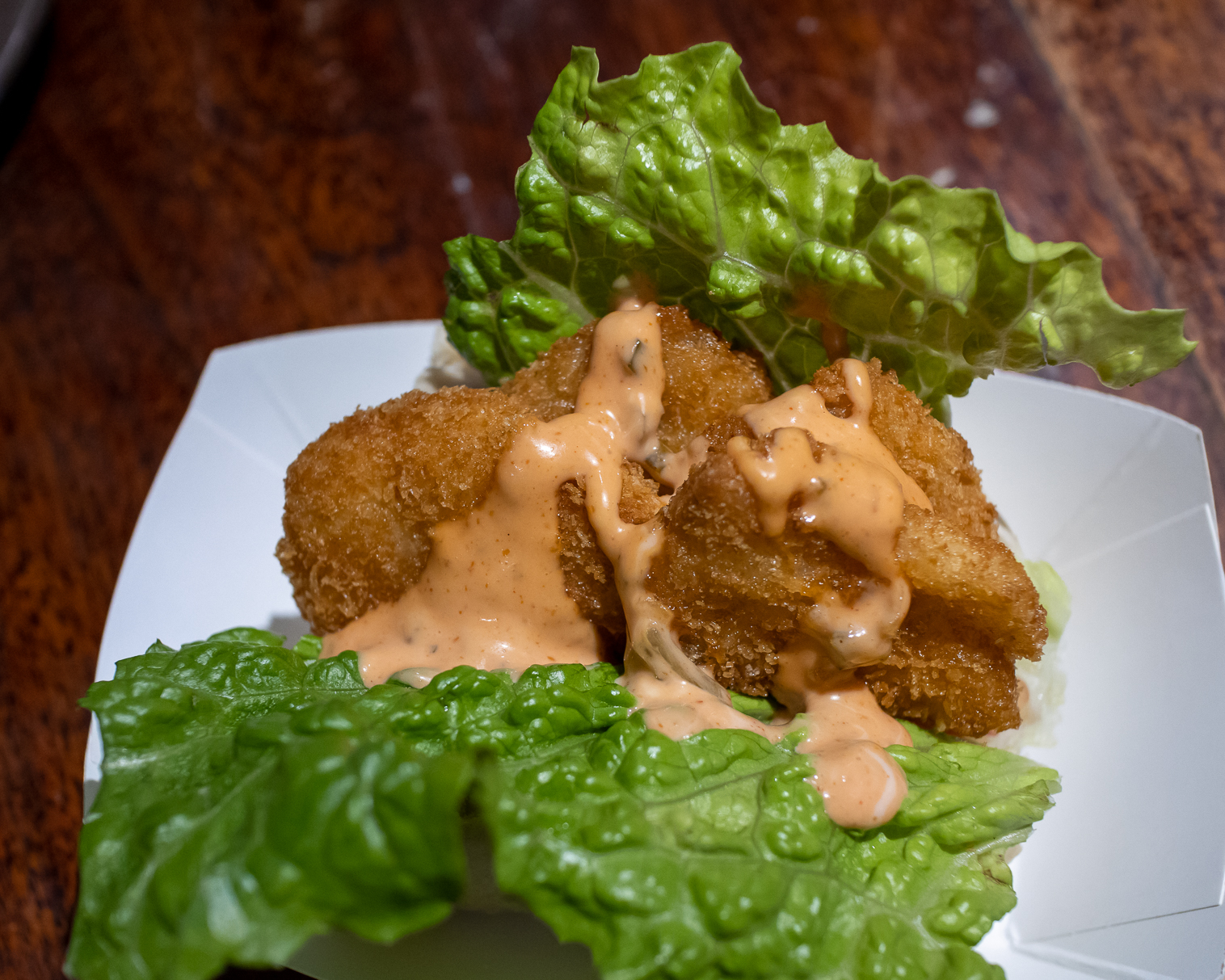 Kilarney’s bar will serve you one specialty dish: the Cajun Meatballs. We aren’t sure what makes them “Cajun,” but they were not unpopular. The sauce was creamy and the meatballs were well made. We would have liked more herb or spice in the dish, but they are probably a filling accompaniment to a cold pint. 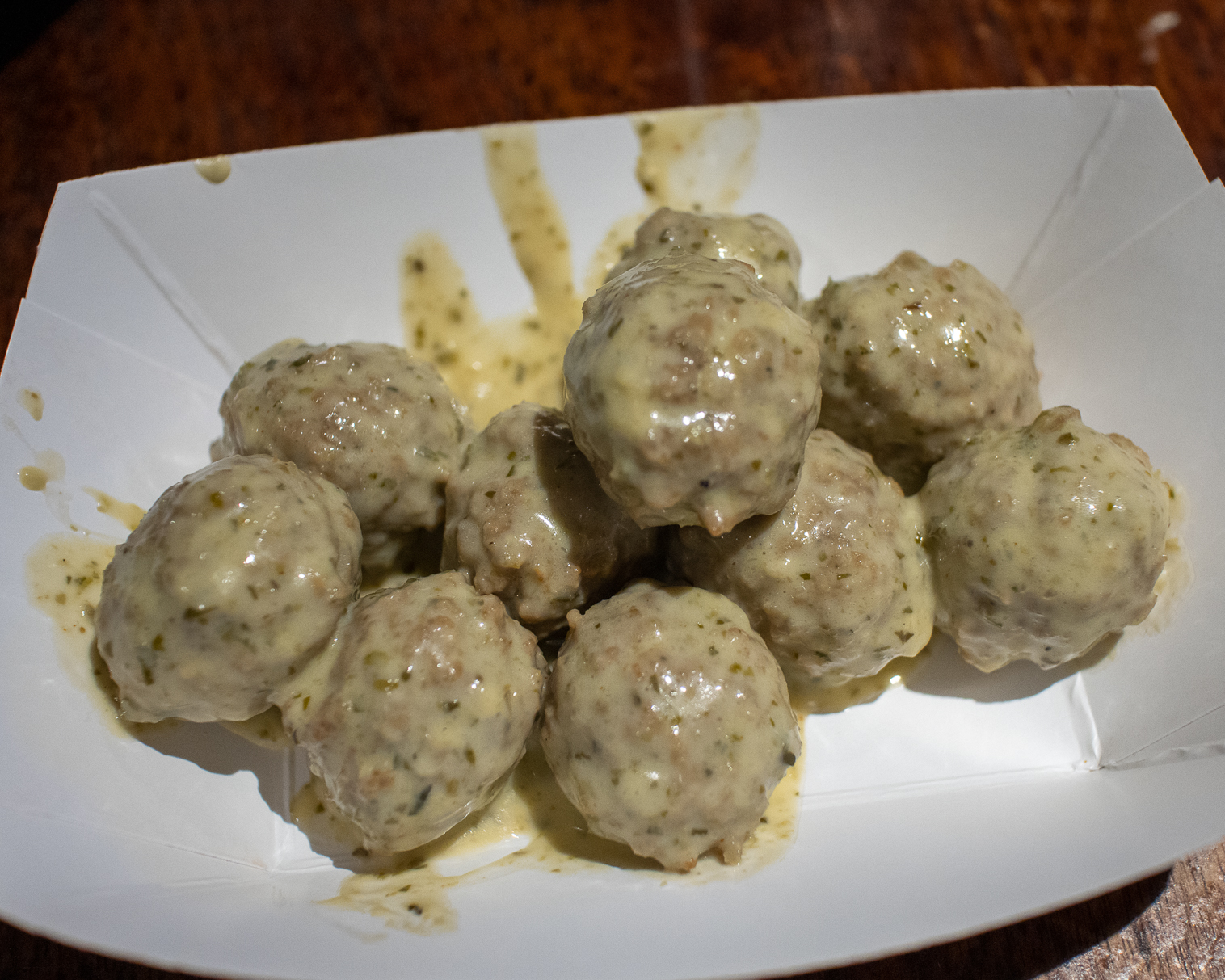 Despite what the website says, there are three, not four, dishes at this New France-based booth. Specifically, there is no Shrimp Po’ Boy.

Our favorite item was the Blackened Chicken. It was well-seasoned, if a bit lonely on the plate. We actually thought it would have been better with Café Lulu’s grits than the sausage and red sauce. We also enjoyed the Mardi Gras Corn and would order it again. I would have preferred more sweetness from the corn, which I thought was overwhelmed by the bacon, but everyone agreed it was well-prepared.

While we give the park’s culinary team credit for attempting the Crawfish Boil, the result was the lowest scoring offering at the event. Nothing was well prepared and the flavors were wrong. The seasoning tasted like Old Bay, which doesn’t seem very NOLA, and overwhelmed everything. Moreover the dish cried out for lemon. Perhaps, as the event progresses it will improve.

BGWFans Pro Tip: Eat the chicken with the corn to create a balanced dish. 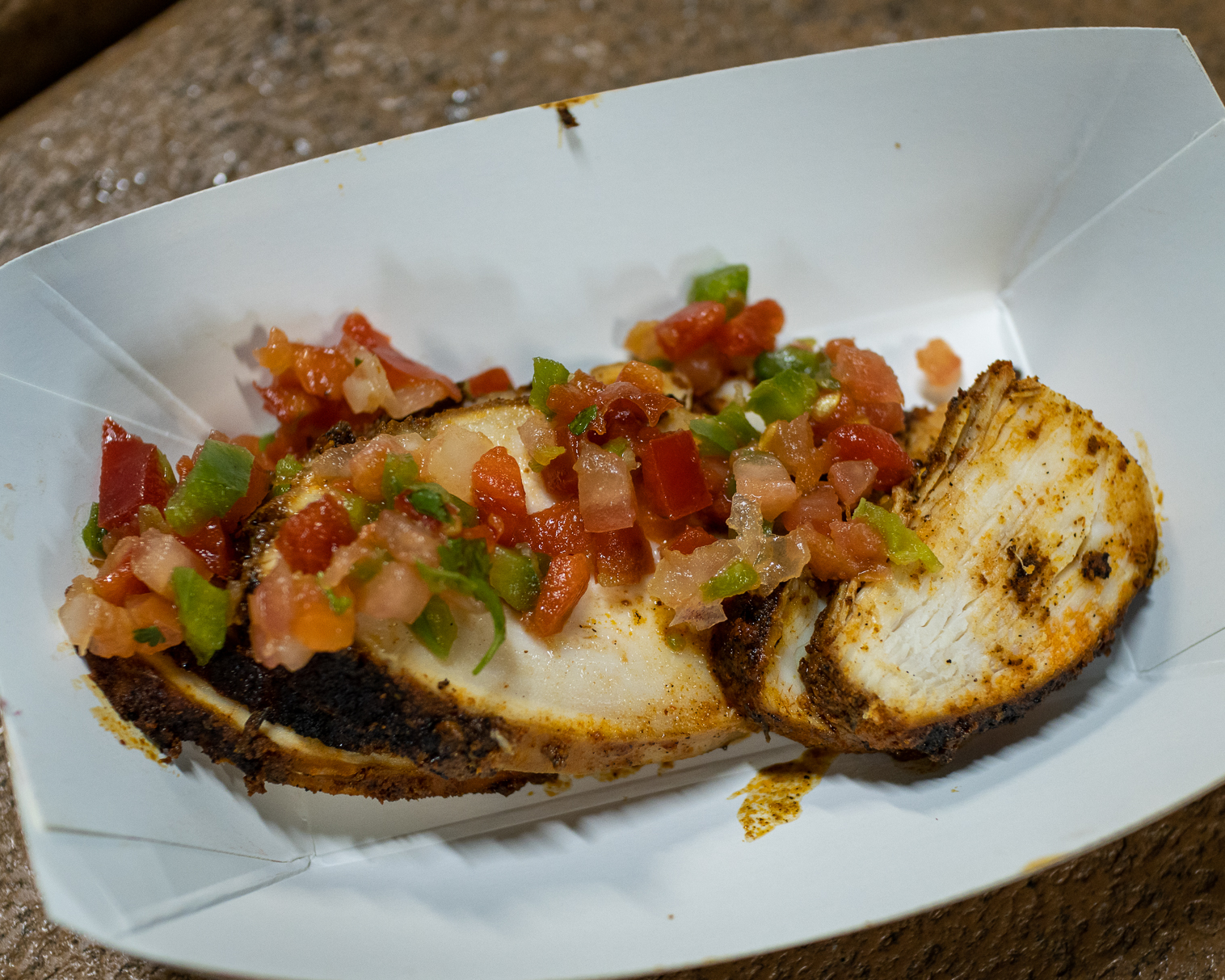 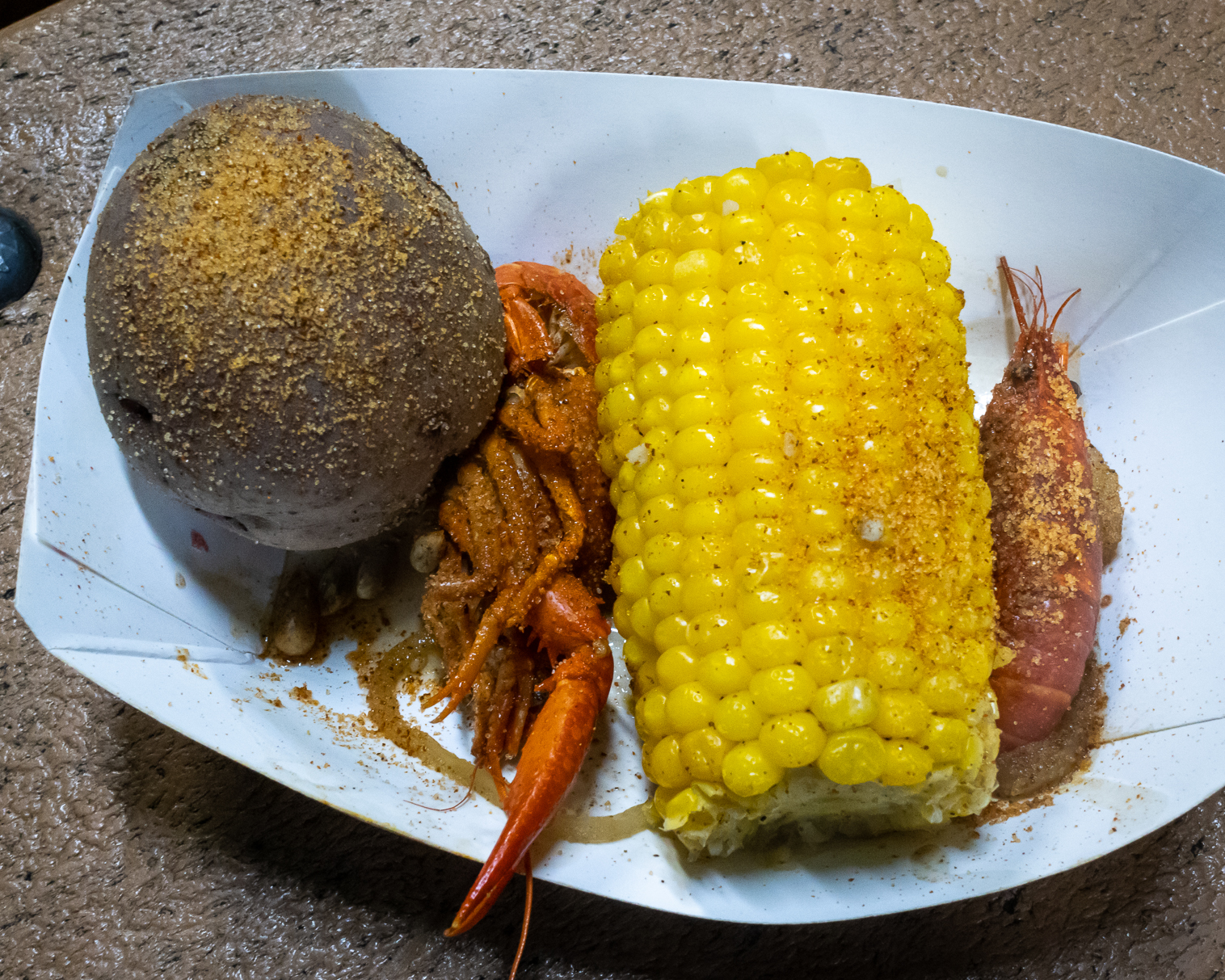 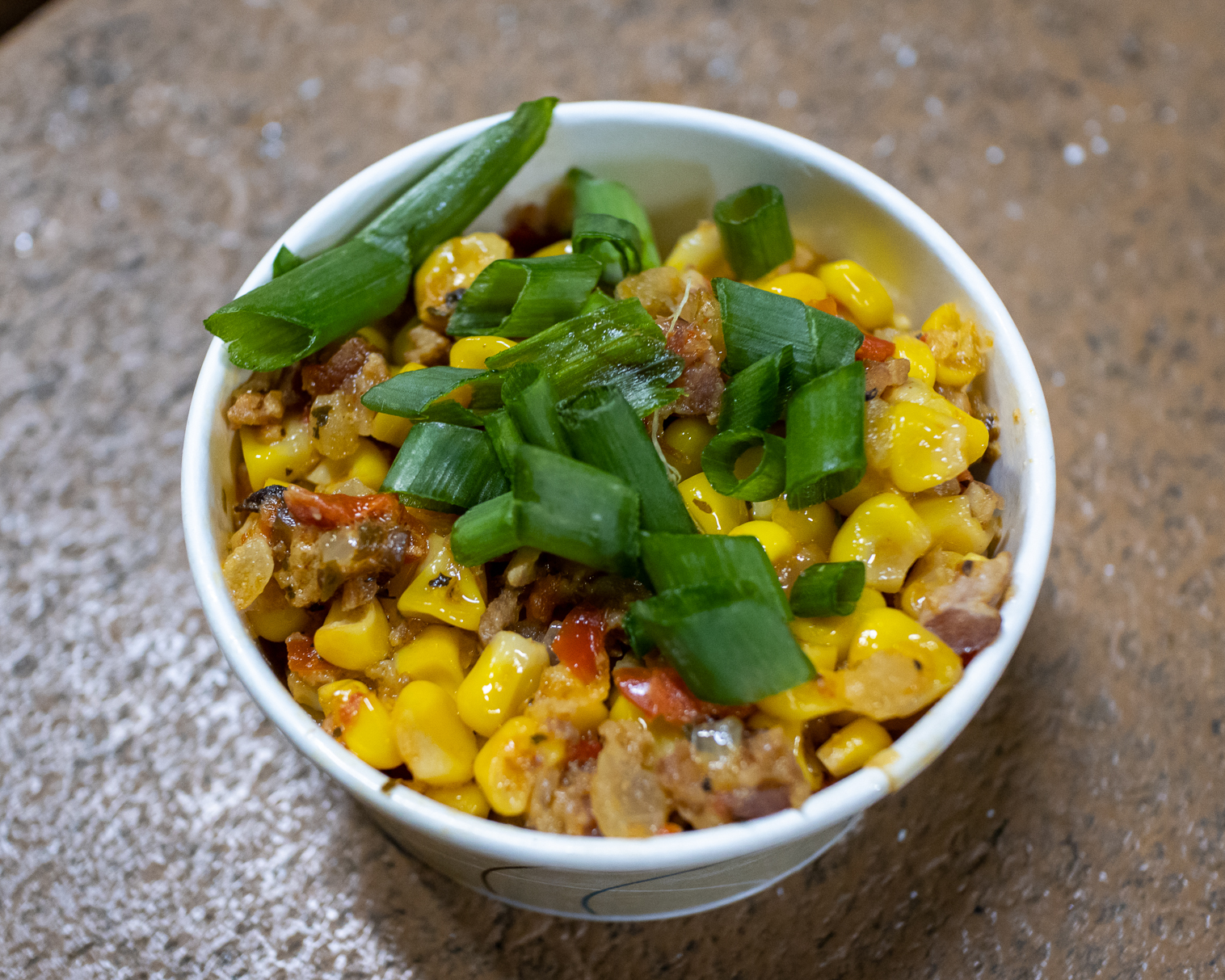 While not everything was perfect, we absolutely enjoyed our culinary adventure, and look forward to returning to eat more food and see the new shows. Zachary and I would also like to thank Belsaas for bravely driving in from central Virginia to help us with this review. The snow started in Williamsburg very soon after we left.

We hope this guide is useful to everyone else who decides to venture out in the Virginia winter to experience BGW’s second annual Mardi Gras event.